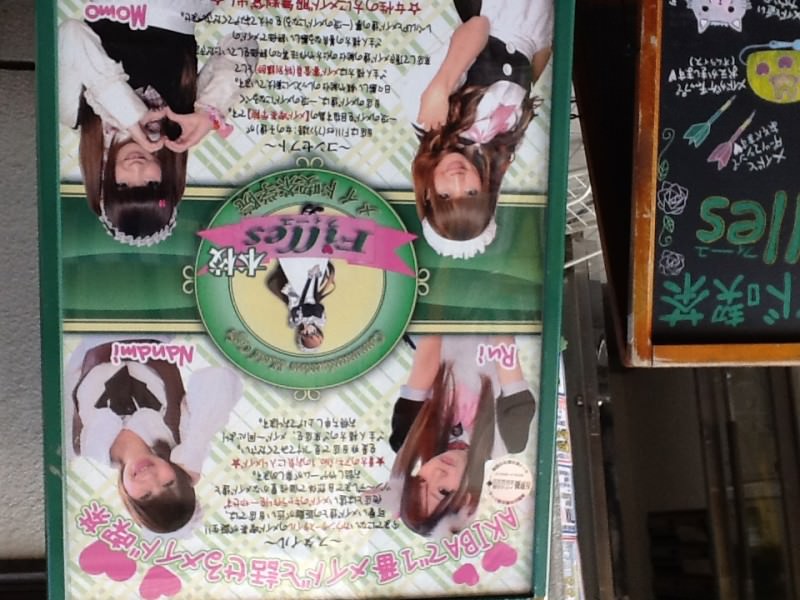 Akihabara is a paradise for electric appliance and anime subculture fans. Akihabara started as a place where radio parts were sold just after the Second World War. Today Akihabara is famous as the cheapest place in Japan for electric appliances. It’s also well-known as a place of ‘otaku’ (Japanese word for geeks) including comic-book devotees, video-game fanatics or anime figurine colletctors. Among all the shops, maid cafés attract attention, especially to men. If you spot girls dressed in a waitress costume delivering brochures on the street, they are the maid café waitresses who attract customers to their shops. They wear a maid dress, petticoat, and apron and frill accessory. At a maid café, they act as customers’ servants and entertain them just as the customer’s own servants. When customers enter a maid cafe, they will be greeted with ‘Okaeri nasai mase, goshujin sama!’ which means ‘Welcome back home, my lords!’

Maid cafes offer similar menus as other cafes and restaurants. A typical menu will include ‘omuraisu’ (egg omlette wrapped around rice) on which the maids will draw the shape of ‘heart’ with ketchup to show their special affection to the customer. When you order ice cream or parfait, they ask customers to chant a magic word to make it tastier. They chant ‘ Moe Moe Kyun!’, which doesn’t mean anything but something which sounds cute with a gesture of  ‘heart’.

Most of the maids are teenagers or in their twenties. Some of them are non-Japanese who came mainly from China, Korea or Russia. Many of them look like innocent and cute high school students in their costumes.

Hundreds of years ago, wealthy gentlemen went to Geisha quarters to be entertained by Geisha. Even today, male customers are called ‘Oniisan’ or ‘my elder brother’ by Geisha and Maiko, at a tea house where a homey atmosphere is created. The Maiko and Geisha will treat the customers well, not as a customer but as their intimate family member.

Time went by and the way customers are treated may be different but the concept of the service at Geisha house and Maid café is very similar. Both of them try to create a comfortable and home atmosphere and treat customers as their most important guests. Customers can relax themselves and enjoy being entertained even if it’s just for a short time.