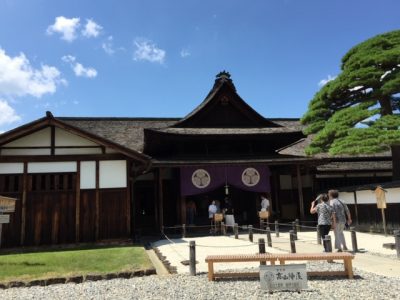 Takayama is the largest city in Japan in terms of size, bigger than Tokyo, but this city is surrounded by mountains and its population is only 90,000.

This area was once abundant in timber and produced minerals such as iron, gold, and lead so the Tokugawa military government directly ruled over it to monopolize the minerals.

1692 to 1868 Takayama Jinya was a branch office for the local governors who were sent to the Takayama area to work. It’s the only existing building of its kind in Japan.

Some parts of the building were restored in 1995 but it still retains its original atmosphere.

Inside, you can see how people lived and worked 300 years ago.

Stepping back in Time

Due to heavy snowfall in the region, vertically split wooden shingles were used on the roof as opposed to the common clay tiles, as wood was more durable and wouldn’t crack from the weight of the snow.

The patterns of tatami-mat borders, entrances, and even toilets are different according to the status of the people who used them and showed strictly social classes were defined in feudalistic age.

There is a female attendants’ room which is not protected by storm doors. They used only windows with translucent white paper pasted on a frame so that these female attendants could wake up with the sunlight in the morning and never oversleep for their duties. The sunshine through thin paper windows was their natural alarm clock.

There are metal rabbit emblems throughout the building to hide nails. Rabbits are prolific breeders and symbolize prosperity and also rabbits with long ears symbolize good rulers who can hear people’s appeals.

There is rice storage where rice sacks are exhibited. There was a big riot by farmers in this area when the heavy rice tax was imposed on them. Many leaders of farmers sacrificed their lives to appeal their miserable situation to the central government. Eventually, Governor of Takayama was demoted and replaced thanks to their sacrifices.

Something that is seen only in this building in Japan is its courtrooms. One is the civil courtroom where money problems and boundary issues of the land were judged.

Another one is the criminal courtroom and torture room where tools of torture for examining a suspect and a wooden cage which was used to carry a suspect to Edo or today’s Tokyo are exhibited.

One of the common ways of torture was to put heavy stones on the suspect who sat on the rough pebbles on the ground.

Every morning the local markets are held in front of the main gate, giving you an opportunity to meet the friendly locals before immersing yourself in their ancestor’s history. Takayama Jinya introduces some very intriguing Japanese history and is a must in my opinion, for visitors to Takayama.