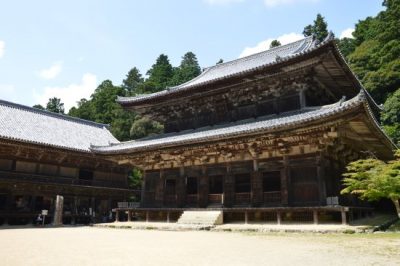 Even though Engyo-ji is only 45 to 60 minutes by bus and ropeway from the Himeji train station, this quiet, mountain-top Buddhist temple gives the impression of being much more remote. Engyo-ji has managed to avoid the advance of the modern Japan that has grown around the base of the mountain and has maintained a world of its own. Today, Engyo-ji is best known as one of the film locations for the recent movie “The Last Samurai”. Though most of the movie was filmed in New Zealand, a few of the scenes from the winter hideaway for the Samurai were filmed at Engyo-ji. Engyo-ji is also used for Japanese television period dramas. The temple is number 27 of the 33-temple Saikoku pilgrimage. This pilgrimage located in western Japan is dedicated to Kannon, the goddess of Mercy.

Engyo-ji’s history is over 1,000 years long. Engyo-ji was initially founded as a Tendai sect temple by Shoku Shonin in 966. It is said that Shoku Shonin saw a celestial being in a cherry tree on the mountain, which inspired him to carve a statue of Kannon, the Goddess of Mercy out of the cherry tree. The temple he built around the statue became informally known as “Mt. Heiei West”, referring to the largest of the Tendai sect temples near Kyoto. Even though Engyo-ji was located far away from Kyoto, many aristocrats would regularly visit the temple. The name literally translates to “To Teach”, an indication of its initial function as a training temple for monks. The temple teaches to maintain a balanced personality and to keep harmony with your fellow man.

Located at the top of Mt. Shosha, 371 meters (approximately 1,200 feet) above sea level, the expansive temple grounds roughly run from east to west, with the temple buildings dotted along the mountain top surrounded by thick woodlands. During most of the year you will find some kind of flowers blooming, or during the fall you may see the Japanese maples turning bright red. Mt. Shosha is also a sanctuary for endangered bird species.

As you exit the ropeway terminal building, you are funneled onto a graveled, hilly path that takes you on a journey through the trees. Along the way to the temple’s buildings, you will find 33 small Kannon statues, one for each of the temples in the Saikoku pilgrimage where pilgrims can offer prayers. You will also find numerous small trees donated by pilgrims and believers.

The first structure encountered is the Sanmon. This was the original, formal entry of the temple, and marked the demarcation between the spiritual world of the temple and the secular world. After passing through the gate and continuing for about 10 minutes you will come to the Maniden. Here, the Nyorai Kannon is enshrined as well as Shoku Shonin. It is said this building was built on the spot where the founder of Engyo-ji carved the Kannon into the cherry tree. The original building burned down in 1472, and a spring appeared where the cherry tree once stood. This building is the focus of the pilgrims coming to the temple. This was also where the scenes from The Last Samurai were filmed. The building is constructed on a steep hill-side, with many large support pillars. Because of this, the building has been compared to Kiyomizu-dera in Kyoto. As you walk up the stairs to the temple, you will see the similarity. When you walk inside the hall, you will find that you will not be able to see the Kannon, unless you are here on January 18 which is the only day of the year when the Kannon is on display. However, every day, you will likely see pilgrims worshiping here.

As you continue on past the Maniden and past graves of the feudal lords of Himeji Castle you will arrive at three large buildings which were once the heart of the monastic complex known as the Mitsunodo. From right to left the buildings are: Daikodo or lecture hall, Jikido or living and dining hall and the Jogyodo also used a lecture hall. These three buildings are where the monks would live and study sutras. On the second floor of the Jikido is a large room, 40 meters long, which is unusually long for Japanese Buddhist Temple architecture.

How to get to Engyo-ji

Take the number 8 Shinki bus from Himeji train station to the base of the ropeway which is the last stop on the bus route. The bus station is in the corner of the first building on the left hand side street directly in front of the train station. During most of the day, there is a bus leaving every 20 minutes. The bus ride to the base of the ropeway takes about 40 minutes and costs 280 Yen. The ropeway leaves every 15 minutes and the ride is only about 5 minutes long. The ropeway is 900 Yen for the roundtrip. Admission to the temple is 300 Yen.