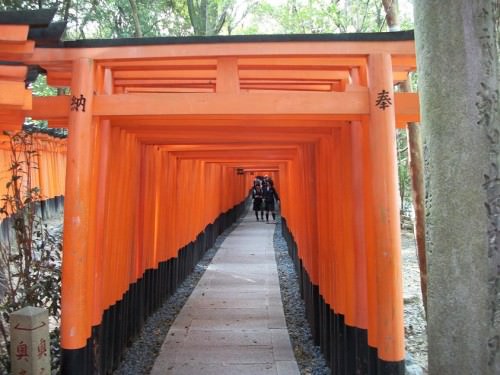 Its picture can be found in many travel brochures, and it has even appeared in movies such as Memoirs of a Geisha. And even though it is only a short 5 minute train ride from the always busy Kyoto Train station, few people make the journey to Fushimi Inari Shrine. Often thought of as the headquarters of the more than 20,000 Inari Shrines located throughout Japan, this shrine can provide a quiet respite to a busy itinerary.

In Shinto, the indigenous religion of Japan, Inari is the goddess of cereal, or in other words, rice. So as you might guess, both the goddess and the shrines are very important. It is said the very name Inari, is derived from the words Ine, meaning rice, and Naru meaning to grow.

Inari Shrines can be instantly recognizable by either the fox statues guarding both sides of the shrine entrance or the many vermillion Torii gates lined in a row in front of the Shrine. Foxes are the messengers of Inari, and are often found with keys to the granary in their mouths and wearing red bibs. In Japanese culture, foxes are endowed with mythological powers, such as being able to posess human bodies, adding to the mysticism of the shrines.

No one is really sure how the custom of building numerous vermillion-colored torii gates got started. But the most prevalent thought is that farmers and sake breweries would add them in hopes of a good rice harvest. Today, especially at Fushimi Inari, it is another oppurtunity for advertising.

Fushimi Inari shrine is spread out over a large, eastern-facing hillside with tunnels of the vermillion-colored gates stretching over kilometers. It is said there are over 1,000,000 of the torii gates. The main Torii gate at the main entrance to the shrine is directly in front of the JR train station. Directly behind the main gate, at the base of the hill lies the main part of the shrine. This part of the shrine is often busy with worshippers, and on lucky days you will often see traditional weddings being held. There is even a small stage where musicians playing traditional musical instruments will accompany dancers performing Kagura-style dances. This style of dance, performed at Shinto shrines, is over 1,000 years old.

The main draw of the shrine, the long tunnels of torii gates, can be found on the hillside behind the main part of the shrine. Following the path up the hill, you will soon come to the first gates. The striking contrast between the brightly-colored, vermillion gates and the dark greens of the trees poised overhead is impressive and beautiful. But as you keep walking through the tunnel of gates, the sheer length of the tunnels is unforgettable.

How to Get to Fushimi Inari Shrine

The easist way is to take the Nara line from Kyoto train station. Be sure to take a local train as the express train don’t stop there. Get off at the second stop which is called Inari.