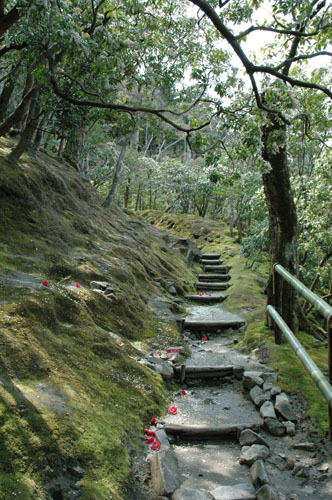 Paths are generally constructed of beaten earth that can be left plain or covered with sand or fine gravel, on top of which stepping stones can be placed. Irregular, flat stepping stones were used in the tea roji to guide the visitor to the tea house. Later stepping stones were introduced into other gardens. The most commonly used materials are slate, schist, flint and granite, left as natural slabs or shaped into more regular forms. In most gardens, stepping stones are of different sizes and are arranged in a variety of patterns.

Garden passages paved with intricately combined stones were expressions of early Japanese gardening techniques. Stone paths connected the many buildings in temple districts and were often a visual focus of tea gardens. In later years, particularly during the Edo period, influenced by tea ceremony aesthetics and Zen, stone pavements became even more refined.

According to the Sajutei-ki, a guide to gardening principles written during the Heian period, one of the main features of a proper garden should be the arrangement of one large, upright stone flanked by two smaller stones of varying sizes. This trinity has Buddhist overtones, since the three stones can be likened to images of the Buddha supported by two Bodhisattvas as is often found in many Buddhist temples in Japan. Whether used for its religious overtones or not, however, this grouping of three stones is generally recognized as the most fundamental stone arrangement in Japanese gardens. There are two types of rock triads: a horizontal triad where the three rocks are arranged to form a triangle when viewed from above (hinbonseki) and a vertical triad where the rocks are arranged to form a triangle when viewed from the side (sanzanseki).

Ancient Japanese believed that all natural phenomenon were endowed with a spiritual force, and that huge rocks and mountain peaks were occupied by god-spirits that needed continuing homage, in the form of prayer and offerings. This animistic view of the world around them endured in the form of Shinto. Sand mounds or cones of sand in gardens are considered to be sacred sites where spirits live.

In dry landscape gardens, pristine white sand came to symbolize the ocean and the sand was manipulated to form ripples and other aquatic effects. Temple priests rake the sand into the form of big and small waves, tiny ripples, running water and scrollwork. In creating sand patterns, the size of the sand grain is very important. If the grain is too small, it is easily disturbed by wind or rain. But if the grain is too large, it is difficult to rake. Color is also important. White sand carries connotations of purity and can be dazzling in the sunlight, while darker colors such as gray or brown are said to convey feelings of tranquility.

A popular pastime among aristocrats of the Nara and Heian periods was to hold gatherings known as kyokusui-no-en. These drinking and poetry-writing festivities, based on Chinese practices, were always held on March third in the lunar calendar. Participants would sit by a curved stream and labor to compose traditional poems called tanka before a cup of sake floating downstream reached their spot. These narrow, pleasantly-meandering streams (yurimizu) became indispensable elements of the Heian period garden. The waterway was typically made to flow from the main house to a small pond.

The sound produced by using flowing water and a shishi-odoshi is intended to frighten away wild animals that have ventured into the garden. Water flows into a long bamboo tube set seesaw-style atop a wooden base. When the tube fills with water, the bottom automatically swings downward to empty the water. When it swings back up it strikes a large rock set on the ground for that purpose, making a loud, resinous sound. This not only scares off unwanted intruders, but its intermittent reverberation acts as a refreshing counterpoint to the tranquility of the garden, and emphasizes the importance of appealing to all five senses when designing a garden.