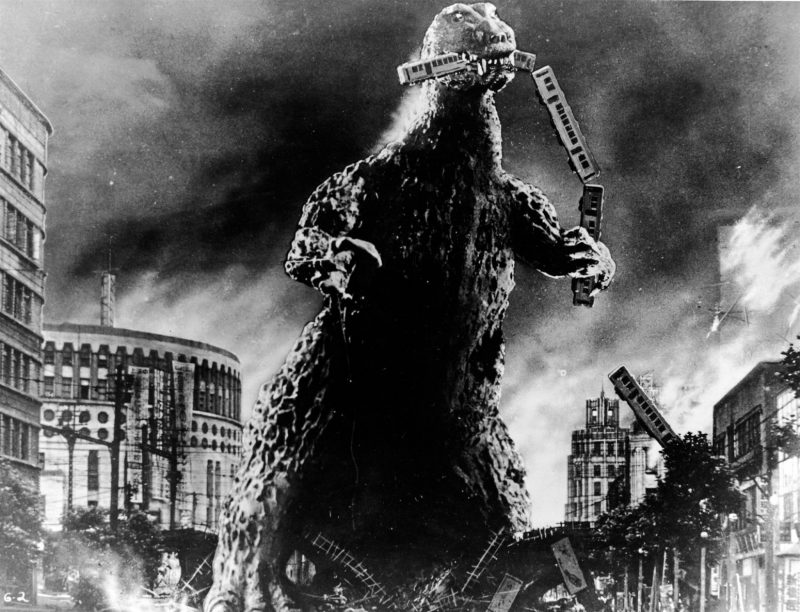 Did you know the original Godzilla (“ゴジラ” Gojira in Japanese), was made as an anti-nuclear protest film? In 1954, a Japanese fishing boat inadvertently strayed into the U.S. H-bomb testing range of the Bikini Atoll. The crew aboard were subsequently irradiated, with one dying of radiation poisoning. With the memories of Hiroshima and Nagasaki still fresh in their minds, this incident infuriated the Japanese people. As a result, the Toho studios developed the concept of a radiated monster who rises from the ocean to attack Japan, and filming began later that same year.

Because the movie was such a big box office hit in Japan, it received Hollywood’s attention. But they felt changes were needed to make it more acceptable to the American movie market. First, two of the main characters were married through an arranged marriage which were still very common in Japan at that time. Hollywood felt that American audiences would not understand this and would not feel comfortable about it. But more importantly, they also wanted to remove all references to America and it’s nuclear testing.

But by the time these things were removed, the movie was too short for release. So the Hollywood studios quickly hired Raymond Burr. They filmed for 24 straight hours with doubles who showed their backs to the camera, and with Raymond Burr in the frame facing the camera allowing them to seamlessly edit the new footage into the Japanese film. They also added a happier ending than the open-ended ending of the Japanese version.

The rest is as they say, history, with 36 Godzilla movies to date. One of the more recent movies called “Shin Godzilla”, was the biggest box office movie ever in Japan. It was controversial because of the similarities between the Japanese government’s response to Godzilla in the movie to the Japanese government’s actual response to the meltdowns at the Fukushima nuclear power plants.