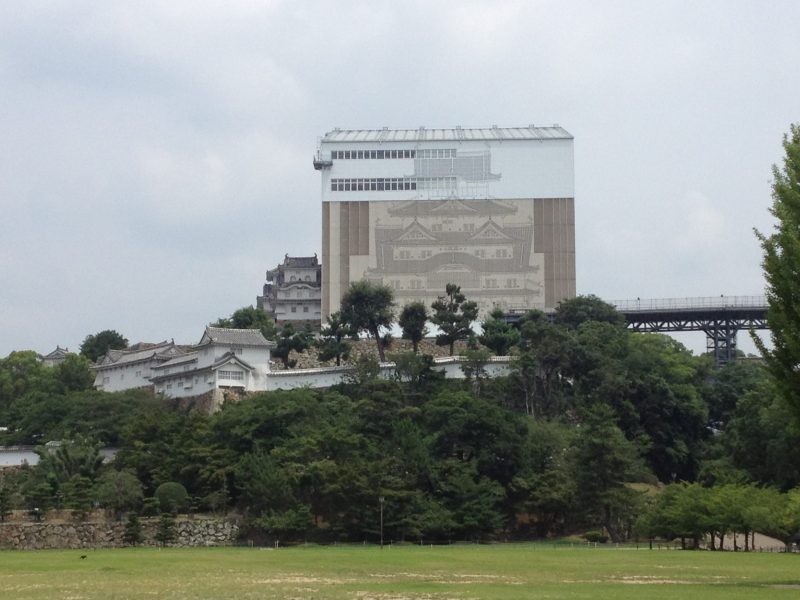 As you enter the main castle gate, you are guided by signs indicating the route you should follow in true Japanese fashion. Eventually, you are led to the entrance of the protective structure. There is an additional charge to enter the protective structure, but it is minimal and well worth it. Here is where you will get an up-close view and explanations of what is being done. You can even take the elevator up to see the work being done on the roof. Having been to Himeji Castle many times with tour groups, this was the first time I had an up-close and personal view of the main tower. It was certainly impressive.

There are many signs (in both Japanese and English) explaining what was being done. The thing that impressed me the most was that as with many other things in Japan, the renovation involved processes that were both hundreds of years old as well as modern, state-of-the-art processes. For example, the “recipe” for creating the plaster mix was the same used 400 years ago when the castle was originally built. Items such as ground-up sea shells, hemp fibers, seaweed starch and other items were used to create the mixture. At the same time, computer models are being used to locate potential weak points in the castle against earthquakes. About 30 of these had been identified, and plans were being made how to best increase the resistance of the castle to earthquakes without destroying the “antiqueness” of the castle.