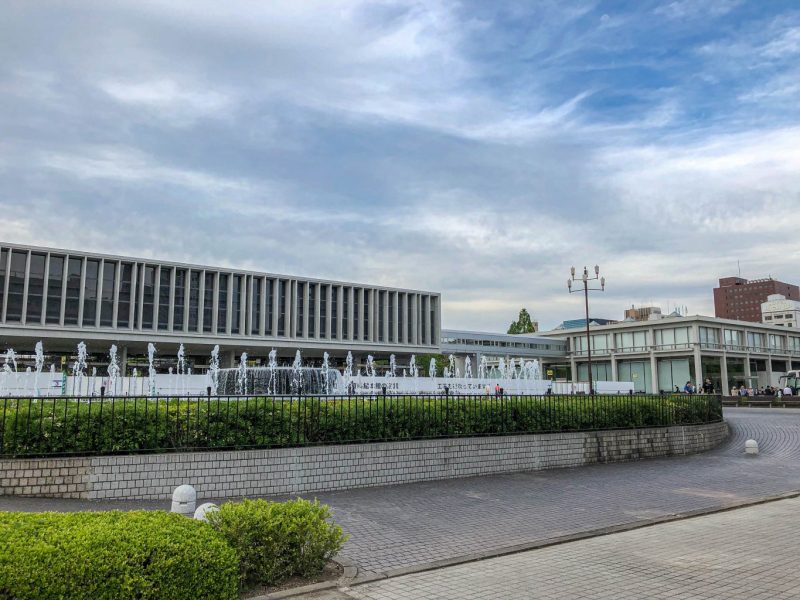 On April 25, 2019, the Hiroshima Peace Museum fully reopened after being partially closed for several years for earthquake-proofing renovations. While the work continues on the outside of the building, the inside has been completed and the museum and all of its exhibits have been completely redone.

Foreign language audio guides are available as they were before, and can be rented at the ticket counter in the lobby. The museum tour starts by taking the escalator to the second floor, where you enter a circular room. On the wall, is a`180 degree diorama displaying the area in the vicinity of the museum after the bomb. All that is left standing is the A-Bomb Dome and a few isolated buildings here and there. In the center of the room, is a circular map of Hiroshima. A short computer-generated movie re-enacts the dropping of the bomb. setting the mood.

Next the tour takes the visitor through a couple of rooms that documents what Hiroshima was like in the years immediately preceding the bomb, and what life was like in Hiroshima on the morning of August 6, 1945, the day the bomb was dropped.

The next room documents the dropping of the bomb, and the immediate results of the bomb including numerous short film clips and photos showing the mushroom cloud and the damage from the bomb. It was here the experience of the museum began to get more intense. There were also many exhibits showing the the effects of the bomb such as snapped metal girders, melted metal and glass fused into a single, large mass and tattered clothing. The lighting in the exhibit rooms was perfect. The exhibits themselves were very well lit and easy to see. But yet, the room itself was dark, helping to set the mood. There were also many exhibits documenting the short and long term injuries and health issues caused by the bomb.

The next two rooms included a room with photos of survivors and victims. Each photo documented who they were, their age, where they were when the bomb was dropped and what happened to them on that morning. The next room had drawings made by people who went to the area in the hours immediately after the bomb. The drawings themselves were not very good, but their eyewitness accounts were very graphic.

The final room was a large room with a number of touch-screen information kiosks where people could get more specific information about different subjects. There were also exhibits on the walls which included information about such things as the Manhattan Project, comparisons between Hiroshima and Nagasaki, the resulting nuclear arms race, nuclear arms treaties and the environmental effects of nuclear testing. The last exhibit included a much stronger message about eliminating nuclear weapons.

My final impression is that the new version of the museum is much better, however it is much more graphic and intense. The new museum puts a personal touch on that day the previous museum did not have. Stalin once said “A single death is a tragedy. A million deaths is a statistic.”