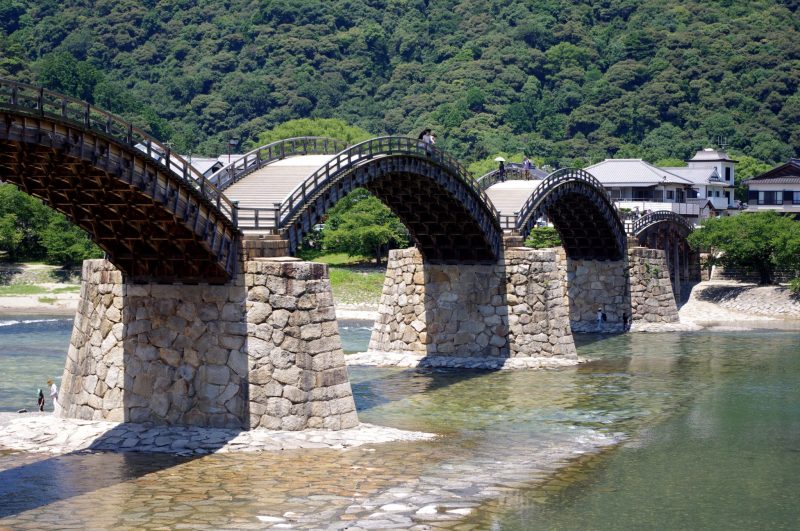 Naturally, when people visit Hiroshima, the first item on everyone’s list is the Peace Museum and Park. Then, many people might think about visiting Miyajima Island. But very few people consider visiting Iwakuni. Iwakuni is located just a short 15 minute ride from Hiroshima by Shinkansen to the Shin-Iwakuni train station, or a 40 minute train ride from Hiroshima on the JR Sanyo line to the Iwakuni station. Each station is only a short 15-20 minute bus ride from the major sights in Iwakuni.

Iwakuni was established by Kikkawa Hiroie in 1603, shortly after supporting Tokugawa Ieyasu at the decisive battle at Sekigahara. After building a castle on the mountaintop using the Iwakuni River for defense, he built seven towns which he named Kuka, Yanai, Komeya, Shio, Zaimoku, Uomachi and Tofu. All of the cities were laid out in a grid pattern which still exists today allowing visitors to easily find their way around. Bridges were built over the Iwakuni River which was often plagued with floods, but they kept being washed away. In 1673, Yoshikawa Hiroyoshi, grandson of Kikkawa Hiroie, decided to build a bridge strong enough to resist the floods. Large rocks were laid as foundation, and then small islands were built upon these foundations with stone piers constructed on the newly-formed artificial islands. Then, wooden arches were spanned between the islands. It took nearly a year to construct the bridge, and the bridge was made without a single nail. The wooden arches were rebuilt every 30 years, but the islands were used for over 275 years. But then in 1950, the bridge was completely destroyed by a large typhoon, but was quickly reconstructed exactly as before.

The bridge, known as Kintai-kyo is 5 meters wide and 210 meters long. It’s five, graceful wooden arches are very distinctive and make it one of the most beautiful bridges in Japan. There is a Japanese saying, “Fuji represents mountains, Nachi represents waterfalls and Kintai-kyo represents bridges”. You can also visit Kikko Park, where the Kikkawa family resided. Here, you will find the Iwakuni Historical Museum and the Kikkawa Family Museum, as well as the famous White Snakes of Iwakuni. These white snakes, said to be messengers from Benten, the goddess of wealth, have been designated as a national treasure by the Japanese government. From Kikko Park, you can also take the ropeway to the top of the mountain where you will find Iwakuni Castle. Originally built by Kikkawa Hiroie over a span of seven years, the current castle is an exact reproduction of the original. From here, the panoramic view is very beautiful. Old armor and weaponry are on display in the castle.
0Shares
PrevNext