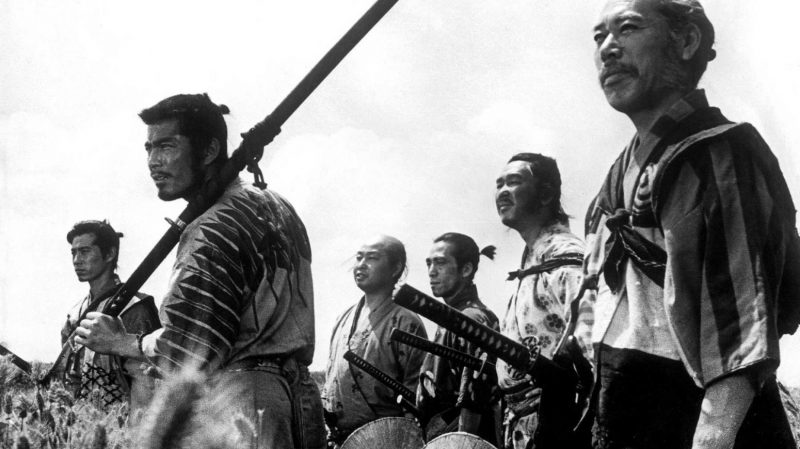 Are you a voluntary or involuntary corona virus shut-in, and tired of watching Gilligan’s Island reruns? How about a virtual tour of Japan through Japanese movies. Watching Japanese movies is a great way to learn more about Japan, its people and culture. Here are some of our suggestions. I have tried to provide a wide variety of films, both new and old.

ANY Movie by Akira Kurosawa

Kurosawa was, and still is, the master of Japanese cinema. Many of today’s best directors studied his movies. George Lucas and Francis Ford Coppola convinced 20th Century Fox to bankroll Kurosawa’s movie “Kagemusha” when Kurosawa was unable to obtain financing in Japan. And Steven Spielberg helped to finance some of his later movies as well.

Kurosawa made 30 movies over 57 years, covering many different types of movies and subjects. But here are a few of my favorites.

This movie is consistently chosen as the best foreign language movie of all time, and one of the best movies ever. It has remained highly influential, often seen as one of the most “remade, reworked, referenced” films in cinema. (It was the inspiration for “The Magnificent Seven”. And it was while watching this movie about 17 years ago when I thought of the name for the new tour company.) This movie was also the cementing of the relationship between Kurosawa and Toshiro Mifune,  one of the most productive director/actor relationships in film history. (My apologies to Martin Scorsese and Robert DeNiro.)

This movie put Japanese cinema on the world stage in 1950, and won the Best Movie award at the 1950 Venice Film Festival. The term “Rashomon effect”, which can be found in any Urban dictionary, came from this movie. The film involves various characters providing subjective, alternative, self-serving, and contradictory versions of the same incident.

Yojimbo literally translates to “bodyguard”. However, the connotation in Japan is more like a hired gun in a western movie. This dark comedy tells the story of a ronin (masterless samurai), who arrives in a small town where competing crime lords vie for supremacy. The two bosses each try to hire the newcomer as a bodyguard. This movie was the inspiration for Clint Eastwood’s spaghetti western “A Fistful of Dollars”.

George Lucas got some of the inspiration for Star Wars from this movie.

Kagemusha literally translates to shadow warrior. But in Japan it is a term used to denote a political decoy. The film won the Palme d’Or award at the 1980 Cannes Film Festival and was nominated for the Best Foreign Language Film Academy Award.

Ran literally translates to chaos, and is Kurosawa’s version of “King Lear”. The film took 10 years to develop and make, and was Kurosawa’s final epic film. Roger Ebert considered Ran worth four out of four stars and inducted the film into his list of The Great Movies. I first saw this movie in 1985 when it was released. It was my introduction to Japan, and it sparked my interest in Japan.

Movies by Other Directors

Both movies follow the masters of their chosen cuisine, as they reveal their obsessive approach to creating the perfect sushi or soup and noodles, and their relentless search for the highest-quality ingredients. Each chef reveals their philosophy, exemplifying various different aspects the sushi and ramen worlds. Both movies are excellent studies of Japanese philosophy and determination to not only produce something that is good, but something that is perfect.

This is a 1962 film telling the story of the 47 Ronin. The story of the 47 Ronin is an excellent example of Samurai loyalty, and is the most popular and famous story from Japanese history. Even today, 300 years after the event, many people visit Sengakuji near Shinagawa where they are buried to pay their respect and offer incense. Numerous Kabuki plays and films re-tell this story, but this is the best of the films. The movie may be a little confusing to those who are not familiar with the 47 Ronin. Since the movie was made for a Japanese audience, who are very familiar with the story, some details are either glossed over or left out altogether.

The Japanese title is “Okuribito”, or the person who sends off. The film follows a young man who returns to his hometown after a failed career as a cellist and stumbles across work as a noukanshi—a traditional Japanese ritual mortician who prepares the dead for cremation. He is subjected to prejudice from those around him, including from his wife, because of strong social taboos in Japan against people who deal with death. Eventually he repairs these interpersonal connections through the beauty and dignity of his work. I dare you to watch this movie without shedding a tear.

Shall we Dance is a 1996 Japanese romantic comedy film. Its title refers to the song “Shall We Dance” which comes from Rogers and Hammerstien’s The King and I. It inspired the 2004 American remake of the same name starring Richard Gere and Jennifer Lopez, although the original was much better than the remake. The story is about a Japanese salaryman who decides to take ballroom dancing lessons.

The film is a portrait of a family over roughly 24 hours as they commemorate the death of the eldest son. The film was widely praised by critics and won the Golden Astor for Best Film at the 2008 Mar del Plata International Film Festival.

Tokyo Monogatari (Tokyo Story) is a 1953 Japanese drama film directed by Yasujiro Ozu, another Japanese film master. It tells the story of an aging couple who travel to Tokyo to visit their grown children. The film contrasts the behavior of their children, who are too busy to pay them much attention, with that of their widowed daughter-in-law, who treats them with kindness. Released in Japan on November 3, 1953, it did not immediately gain international recognition and was considered “too Japanese” to be marketable by Japanese film exporters. Although, I could see the exact things that happened in this movie in America as well.

Train Man, or “Densha Otoko”, is a 2006 romantic comedy that was very popular at the box office. The protagonist is a typical Akihabara anime “otaku” (The best translation is “geek” or “nerd”). He saves a young woman from an obnoxious drunk on a train, and the young woman sends him a set of Hermes tea cups as a thank you. And the story grows from there. To be honest, the movie is a bit over the top. But this type of comedic movie is common in the Japanese film industry today. Anyway, it is fun to watch.

The Twilight Samurai is a 2002 Japanese historical drama film co-written and directed by Yoji Yamada. Set in mid-19th century Japan, it follows the life of Seibei Iguchi, a low-ranking samurai employed as a bureaucrat. Poor, but not destitute, he still manages to lead a content and happy life with his daughters and his mother, who has dementia. Through an unfortunate turn of events, the turbulent times conspire against him. The Twilight Samurai was nominated for the Academy Award for Best Foreign Language film. It won an unprecedented 12 Japanese Academy Awards including Best Picture, Best Director, Best Actor, Best Actress and Best Screenplay.

I would be derelict in my duties if I did not include a recommendation for Japanese anime. I love Miyazaki’s films. What Disney was to American animation, Miyazaki is to Japanese anime. And I would highly recommend any of Miyazaki’s films (Spirited Away, My Neighbor Totoro, Kiki’s Delivery Service, Princess Mononoke, etc.) But I love this movie, and I know you will too. Your Name is a 2016 Japanese anime romantic, fantasy, drama film. It tells the story of Taki, a high school boy in Tokyo and Mitsuha, a high school girl in a rural town, who suddenly and inexplicably begin to swap bodies. It was critically acclaimed for its animation, complex narrative, musical score and emotional weight. The film was also a major commercial success, becoming the highest-grossing anime film. The film won the Best Animated Feature Film award at several film festivals, and an American live-action remake set in the United States is currently in development.