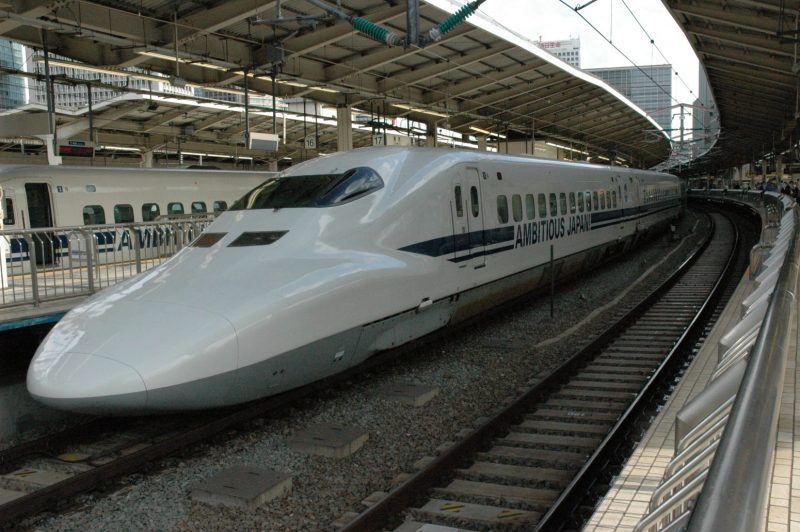 The Shinkansen, known as the bullet train, is one of the fastest trains in the world. It’s a network of high-speed railway lines, which runs at about 200 kilometers an hour on average and connects the main island with other two smaller islands. 900 trains run to carry more than 700,000 people every day. The total distance of the railway lines of Shinkansen is 3300 kilometers. It is not just fast but it’s safe, frequent and comfortable.

The first Shinkansen was built to stimulate the Japanese economy when the Tokyo Olympic Games were held in 1964. Japanese economy was booming at that time so it was necessary for businessmen to go back and forth between Tokyo and other cities in one day.

There has no fatal accident since the operation of Shinkansen and it’s a miracle given the fact that Japan is a country of many disasters like earthquakes, tsunami, and typhoons.

There are many technological measures for the safety of the transportation.

All the trains are controlled by the automatic train control system and are designed to stop when it detects the waves from earthquakes, before an earthquake or tsunami hits

The train is designed to avoid the friction caused by the wind as much as possible when going through the tunnels.

The Shinkansen runs fast because of its stream-line body, its long nose like that of duckbill, its lighter weight by using an aluminum body and straighter and elevated railroads.

It’s not just the Shinkansen itself and the conductors that are impressive, but the squad of cleanup staffers in pink uniform who finish cleaning 100 seats in a carriage in only 7 minutes. Cleaning is done as quickly as possible before its next operation. The cleanup staffers bow all together to the train when it leaves the station.

Traveling on a Shinkansen is a great way to witness many technological and cultural aspects of Japan, that’s why we use them as much as possible on our tours.