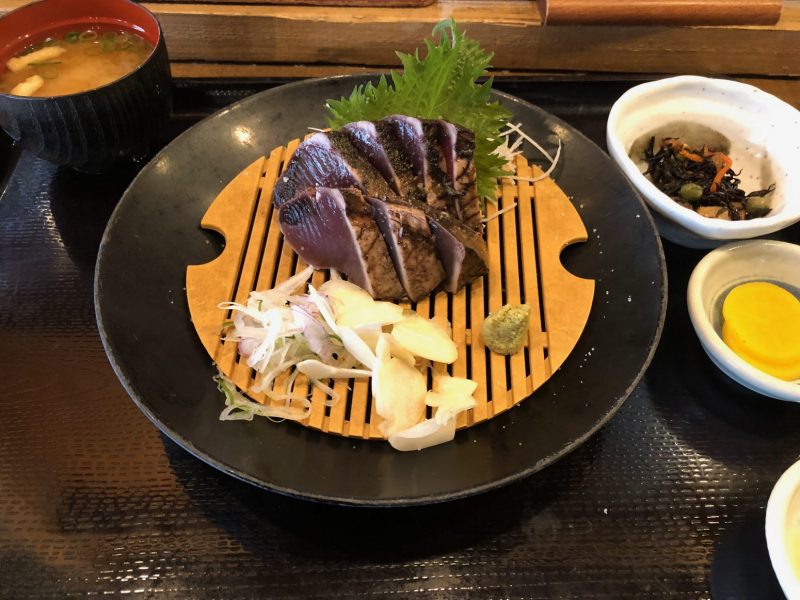 What is Katsuo Tataki?

Katsuo (bonito or skipjack tuna in English) is a medium-sized fish related to tuna and mackerel. The meat of the Katsuo looks similar and has a similar texture to tuna meat. Katsuo is commonly used in Japanese cooking, but that is a subject for another blog. “Tataki” is a cooking method that originated in the Kochi area. The food is seared over an open flame or in a frying pan, leaving the internal part of the fish uncooked. It is thought that Sakamoto Ryoma, a famous samurai born in Kochi who lived at the end of the Edo Period, copied this style of cooking from Europeans in Nagasaki. Traditionally in Kochi, Katsuo Tataki is seared over a rice straw fire.

Katsuo Tataki is one of the local specialties of Kochi, and its most famous dish. Searing the Katsuo filets over the open rice straw fire gives the fish a slight smoky flavor. After the outer layer is seared, the filet is often placed in ice water to stop further cooking, leaving the internal part of the fish uncooked. The filets are then sliced, sprinkled with salt, and served with garlic, onion and ginger garnish. It is also commonly covered in a dressing of soy sauce and citrus. 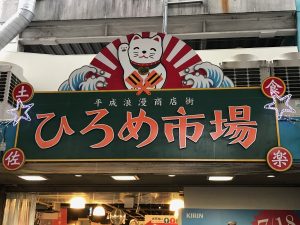 Hirome Market, near Kochi Castle, has more than 60 separate stalls and is often packed with locals. Many of the stalls sell Katsuo Tataki, but other foods can be found as well. Order your food, and then take it to the many common tables where you can rub elbows with the locals while enjoying your Katsuo Tataki.

Myojinmaru is a small restaurant chain specializing in Katsuo Tataki. Their restaurants can be found in the Hirome Market and Harimayabashi areas, and the covered shopping arcade between the two areas.  They have their own fleet of fishing boats, and the Katsuo is sent directly from the boats to the restaurants. They also own their own rice farms where they grow their the rice straw used in their restaurants.