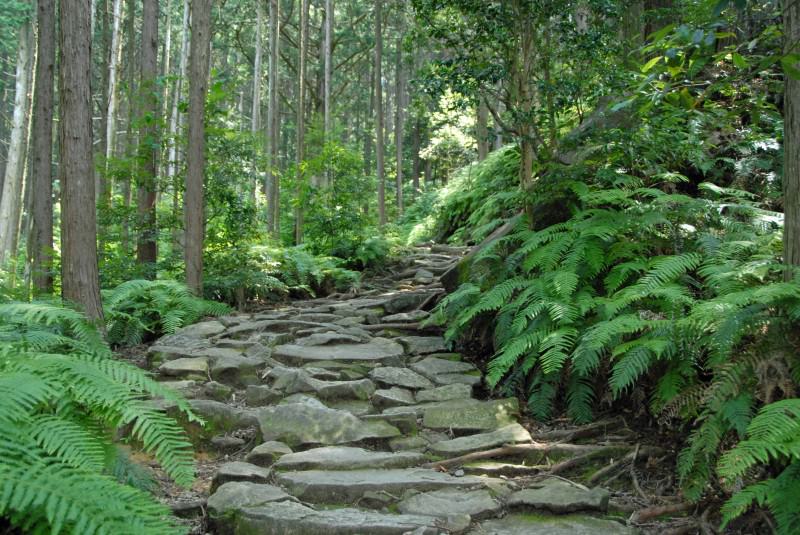 This trail follows the western coast of the Kii Peninsula, starting from Osaka and ending in Kii-Tanabe. This was the route used by the pilgrims from the Kyoto Imperial Court. They would start their journey by visiting Jonangu Shrine just south of Kyoto (near Fushimi). Here they would normally stay for about a week, performing “misogi” (Shinto water purification ritual) and maintaining a strict vegetarian diet to purify themselves before starting the pilgrimage. They would then take a boat down the nearby Yodo River, and begin their journey along the Kiiji. At Kii-Tanabe, there are two options: the Ohechi and the Nakahechi. The Ohechi continues south along the coast line. And the Nakahechi turns westward into the rugged, mountainous interior of the peninsula. Because the Kiiji was used by people from Kyoto, as the pilgrimage from Kyoto became popular about 1,000 years ago, the Kiiji became popular at that time.

The Ohechi leads from Kii-Tanabe along the extreme southern coast of the Kii Peninsula to the Nachi Taisha. This route became popular during the Edo period. It was popular with people who were interested in the Kannon Pilgrimage of western Japan, but was also popular with people who were interested in sightseeing as it followed the scenic coastline of the peninsula. Most of this route has been lost to urban sprawl, but there are a few remaining sections over passes that still remain today.

The Nakahechi started from Kii-Tanabe, followed the river inland and then began its ascent into the mountains at Takijiri Oji. This route was, once again, used by pilgrims from Kyoto, so it became heavily used about 1,000 years ago (the first records of this route date to the early 10th century). During the 11th and 12th centuries, this route was the most popular route for people from the Kyoto Imperial Court, and was the main trail used. A round trip from Kyoto to the Kumano Sanzan and back was about 800 km (about 550 miles), and would take 30 to 40 days to complete. It was sometimes so busy that it became known in Japan as the “march of ants”. This is the most popular section of the trail today.

The Iseji route followed the eastern coast of the Kii Peninsula to Shingu, where it connected with the Nakahechi route. It connected Ise Shrine with the Kumano Sanzan, and became popular during the Edo period. A distinctive feature of this route are the many cobblestoned passes. These were made to reduce erosion along the route as this area of the peninsula receives tremendous amounts of rain.

This route connected the Shingon Buddhist center of Koya-san with the Hongu Taisha, and was the most direct route between the two. The route was about 70 km (about 45 miles), but was very difficult as it crossed over several mountain passes more than 1,000 meters (about 3500 feet).

This 80 km (about 55 miles) route connects the Yoshino/Nara area with the Hongu Taisha. This was considered to be the most difficult route as it crosses over several very high mountains. It was primarily used by “yamabushi” mountain ascetics, practicing an ancient religion/philosophy known as “shugendo”. Practice of this religion was forbidden by Emperor Meiji soon after the Meiji Restoration because it was defined as a superstition not fit for a modern Japan. However, it is still practiced today.