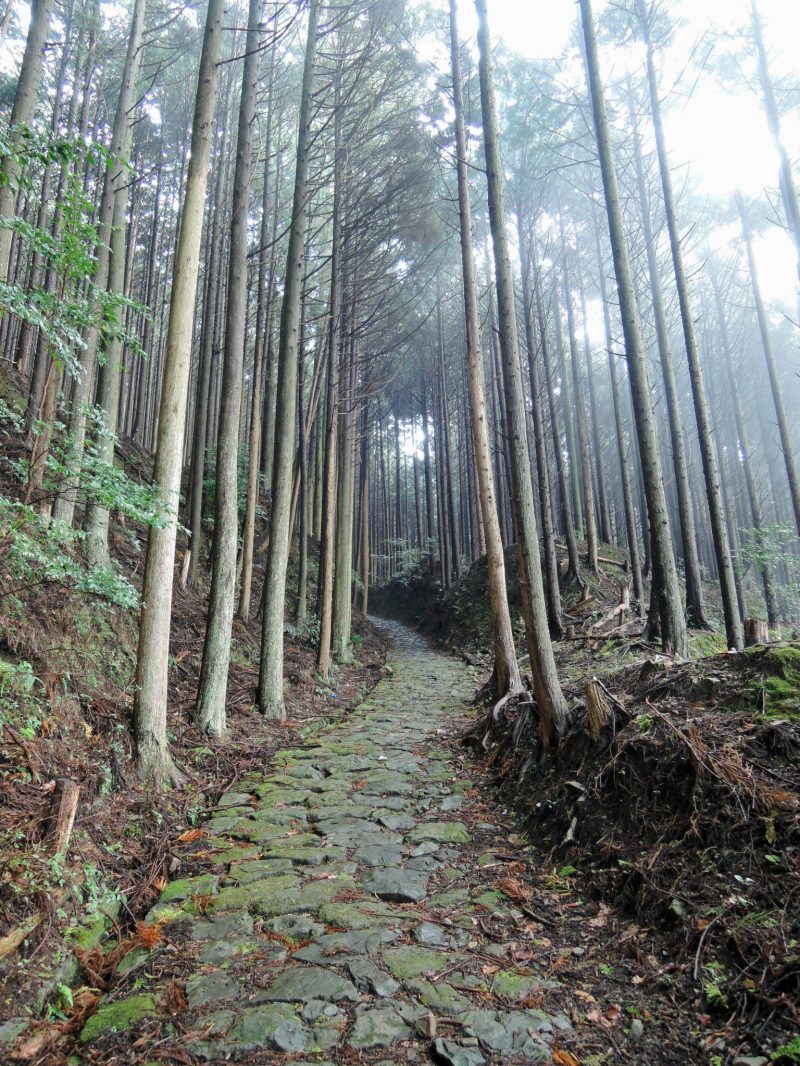 During the night it rained heavily, which meant one thing for today’s walk. It would be very humid. After having an excellent breakfast at the minshuku, I set out for Day 2 at about 8:30 for Tsugizakura-Oji.

For the first kilometer or so, the trail was over pavement, and then changed to dirt trail. For the first 5 1/2 kilometers, the trail steadily climbed past several important Oji to the former site of the Uwadaya-jaya Chaya. At about 700 meters (about 2,300 feet), this location is the highest spot on the trail between Takijirioji and Hongu Taisha Shrine. At one time, there were numerous chaya (literally translates to tea house) along the Kumano Kodo. These were places of rest, drink and food. Some chaya also offered lodging. These chaya were an important part of the Kumano pilgrimage infrastructure. In addition to a place of rest, they also served as centers of exchange between pilgrims and the locals. These chaya were not only found on the Kumano Kodo, but were also common along major highways in Japan such as the Tokaido and Nakasendo.

From here, the trail descended into a small river valley to the Osakamoto Oji. It is thought that the Oji got its name from the fact that the Oji is located at the base of what was once known as Osaka Pass. In his pilgrim’s diary from 1109, Fujiwara Munetada wrote “On the Osaka Pass, there is a tall tree on which a snake-shaped object is hung. It is said in the past, a woman was transformed into the object.” It is also thought that in the old days, at the site of the Osakamoto Oji there was an inn for lords.

The trail continues on, generally downhill until it intersects with the highway. Here is the Gyuba-doji bus stop and another rest stop. In addition to rest rooms and vending machines, there is also a small shop selling food items. However, most of the food items were meant as souvenirs, so lunch items were rather limited. As a matter of fact, there were not many options for lunch along the trail at all, but all of the minshuku will make a bento box lunch for you if you ask. All of the bento lunches I purchased consisted of rice balls with mountain vegetables, plums or fish on the inside and a few pickles. But after the large dinners and breakfasts served at the minshuku, who had room for lunch anyway. There is also a covered area with picnic tables where I rested for awhile to get away from the rain that started just before reaching this area.

Just a short distance past the rest stop is the Gyuba-doji statue. This statue is said to be Kazan (968 to 1068), a retired emperor who made the pilgrimage numerous times. The statue depicts him as a boy riding a horse and cow (the name literally translates to cow and horse child). Next to the Gyuba-doji statue is stone carving depicting Ennogyoja, the legendary founder of Shugendo, an ancient mixed religion based on mountain ascetic practices. The Kumano area has been closely related to Shugendo since the beginning of the pilgrimage. Shugendo is said to have originated in the Yoshino/Omine area of the Kii Peninsula just south of Nara. There was a trail connecting this area to the Hongu Taisha area used by “yamabushi” (practitioners of Shugendo call themselves yamabushi). After the Meiji Restoration, Emperor Meiji made the practice of Shugendo illegal saying that it was not proper for a modern Japan. But it is still practiced today. Behind these two statues can be found a small stone stupa dating back to the 12th century. To be honest, given the importance of the Gyuba-doji statue, I was expecting something larger. The actual statue was much smaller than I thought it would be.

1/2 kilometer past the Gyuba-doji you will come to the edge of the Chikatsuyu Village. You will first cross the Hiki River, and immediately after you will find the Chikatsuyu Oji. It is said that pilgrims would stop here to perform misogi in the Hiki River, and even though it was a warm and very humid day, I decided against this. Today, Chikatsuyu is a remote, sleepy rural village. There is very little here other than a couple of small coffee shops, a small grocery store with vending machines, a post office and another small rest stop (no restrooms or water). If you are looking for something more in the way of food, you will need to find the A-Coop grocery store. If you are using the map from Kumano Travel, the location of the A-Coop on the map is not correct. You should turn right on the street just past the Kumano Kodo Nakahechi Art Museum and walk about 1/2 kilometer. The A-Coop will be on your left just before the road crosses the river. However, there is enough of a selection in the vending machines along the Kumano Kodo, and if you have your own lunch, I would suggest you walk through town to the small, covered rest stop. Or, there are some benches in front of the small grocery store in the village.

There are also a number of minshuku and ryokan in Chikatsuyu where you can stay for the night. Many of the sources on the internet recommend staying here in Chikatsuyu. However, all of the Japanese people who I spoke with who had done the walk suggested to keep going to Tsugizakura village, especially if you are thinking of walking the entire way between Takijiri Oji and Hongu Taisha, which was my plan (Many people stay overnight here and take the bus to Kohiro bus stop to reduce the distance of the walk to Hongu Taisha). I am glad that I had made plans to keep going, because my walk from Takahara to Chikatsuyu only took about 4 hours. After leaving Takahara at 8:30AM, I arrived at Chikatsuyu at about 12:30PM even after a 30 minute stop at the rest area next to the Gyuba-doji bus stop. As it was, I stopped for 90 minutes in Chikatsuyu, and arrived at Tsugizakura, my final destination of the day at about 15:00.

From Chikatsuyu, it is a steady, but not so steep climb on paved roads to Tsugizakura village. There are a number of things to see here. First, you will come to the Tsugizakura Oji. If you take the bus from Chikatsuyu to Kobiro bus stop, you will miss this. And it is easily the most impressive Oji along the entire Nakahechi. The Oji is located at the top of steep stairs that go through a stand of huge, 800-year old cedar trees. These cedar trees are called the “Ipposugi”, which literally translates to one direction cedars. They are called this because all of the branches on the trees point to the south towards Nachi Taisha and paradise. However, there is a scientific explanation for this. Branches on cedar trees need light in order to grow. It just so happens that at this location, the only consistent source of light is from the south.

Next to the entrance of the Tsugizakura Oji you will find the Toganoki-jaya Teahouse. This is a recronstruction, but it will show what the tea houses were like. Next to the tea house is the Tsuguzakura cherry tree, also known as the Hidehira zakura. In October 1109, Fujiwara Munetada, on his pilgrimage to Kumano, wrote in his diary, “On the left side of the road, there was a cherry tree grafted on a Japanese cypress. It was truly a rare thing.” The tree was famous for hundreds of years, and this is how the nearby Oji received its name (Tsugizakura translates to grafted cherry tree). And down the hill (just follow the signs) you will find the Nonaka-no-Shimuzu spring. This was another site of “misogi” for the pilgrims.

The minshuku where I was staying for the night was next to the main highway between Tanabe and Shingu at the bottom of the hill. It was a bit of a walk (about 1 km) to the minshuku down a steep hill. I was relieved to hear the owners of the minshuku offer to take me back to the Tsugizakura Oji the next morning by car to continue my walk since the walk tomorrow is the longest of the entire trek.