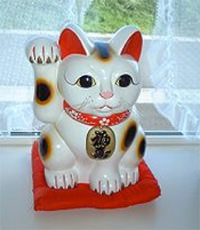 Ask anyone who has been to Japan, and they will tell you, you can’t go anywhere in Japan without seeing these statues. Nearly every business in Japan has one displayed somewhere. In Japanese, they are called “Maneki-neko”. In English, there are many interpretations including Beckoning Cat, Lucky Cat and Fortune Cat among others. It may appear to westerners that the cat is waving goodbye. But this is due to the difference in gestures and body language between westerners and the Japanese. The Japanese will call someone to them by holding their hand out, palm down, repeatedly folding their fingers up and down.

The history of the Maneki-neko is unknown, but there are numerous theories as to their origin. The most common is a wealthy feudal lord (some stories even indicate the lord was Oda Nobunaga) noticed a cat who seemed to be beckoning him. The lord followed the cat, only to learn later he had avoided a trap that had been set for him just ahead. Since then, cats have been considered wise and lucky. Another story states a poor, elderly lady in Edo (Tokyo) had to sell her cat to buy food. Afterwards, the cat came to her in a dream and told her to make a clay statue in the likeness of the cat. She did so, and so many people wanted one like it she became wealthy making and selling the statues. Others have noted the similarities between the Maneki Neko’s gesture and that of a cat washing its face. There is a Japanese belief that a cat washing its face means a visitor will soon arrive. This belief may in turn be related to an even older Chinese proverb that states that if a cat washes its face, it will rain. Thus it is possible a belief arose that a figure of a cat washing its face would bring in customers. Whatever the origin, there is no denying the impact of these cats on Japanese culture.

While there are many different types of cats, in different sizes, colors and degrees of ornateness, there are also many similarities. It is said that a cat with its left paw raised will attract customers, while a raised right paw will attract money and/or good luck. (It is said a cat with both paws raised is a greedy cat.) It is commonly believed the higher the raised paw, the greater the luck. Consequently, over the years the Maneki-neko’s paw has tended to appear ever higher. Another common belief is that the higher the paw, the greater the distance good fortune will come from. Some Maneki-neko even feature battery- or solar-powered moving arms endlessly engaged in the beckoning gesture.

Most cats will usually have a decoration around their neck: a collar, bib and bell. These items are most likely an imitation of what was common attire for cats in wealthy households during the Edo period. The small bells were attached for decoration and to keep track of the cat’s whereabouts.

Many cats are depicted holding a coin; usually a gold coin called a koban, used during the Edo period in Japan. A koban was worth one ryo, another early Japanese monetary unit. Although the koban most Maneki-neko hold is indicated to be worth ten million ryo. The coin obviously ties into the cat’s part in bringing good fortune and wealth. It is not surprising then that one can often find Maneki-neko used as banks, a practice which goes back at least to the 1890s, much like the Western piggy bank.

Maneki-neko also come in a wide variety of colors. These different colors, to the uninformed, may be nothing more than for cosmetic appearances. However, each color has its own purpose and meaning. Some of the more common colors and purposes are: