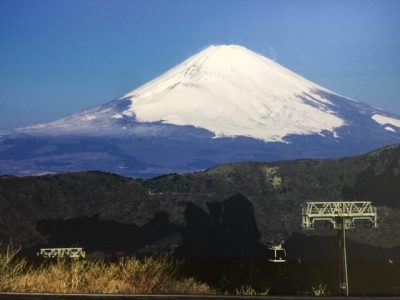 The first thing you will see from the plane to Japan is Mt. Fuji. It rises above the clouds. It’s Japan’s highest mountain with a height of 3776 meters.
Because of its graceful corn-shape, Mt. Fuji has been worshiped as a sacred mountain since ancient times.
‘Fuji’ in Japanese has many meanings like ‘eternity’, ‘one and only’ and ‘never be beaten’. It has frequently depicted in paintings and poetry with the most famous woodblock print being Hokusai’s ‘Great Wave’ which depicts Mt. Fuji from the coast.
Tokugawa Ieyasu, the first shogun of Tokugawa Shogunate liked the view of this mountain so much that he had many Fuji Shrines built for him to enjoy.

Mt. Fuji is unique because it has a triple junction of tectonic plate activity under it. It is said that it became a conical mountain with a gently sloping skirt due to eruptions. The basaltic and sticky magma spread further to wider ranges in all different directions. It has erupted repeatedly and acquired its present shape about 10000 years ago.
It is an active volcano.

The last eruption was on Dec. 16, 1707, and it lasted for 16 days. The ash piled 10 centimeters upon the ground of Tokyo, 100 kilometers away from the mountain.
It’s predicted there maybe another eruption in the next 100 years.

Climbing Mt. Fuji
We have been climbing Mt. Fuji for centuries but you can only climb to the top during the summer. It takes at least 10 hours to hike so people start to walk from the fifth station of the mountain, sleepover at a mountain hut at the 8th station, then wake up at 4 am to see the sunrise. About 200,000 people climb Mt. Fuji every year and half of them are non-Japanese.
It’s easy for most of the people to climb Mt. Fuji in summer but you must have special equipment to climb it during any other season.

Do you happen to know a Japanese saying which goes “those who never climb Mt. Fuji are a fool but those who climb it twice are also a fool.”? You must climb it at least once as a Japanese but after experiencing how hard and tiring it is and still want to climb it twice, you are an idiot.

Me? I climbed Mt. Fuji twice!