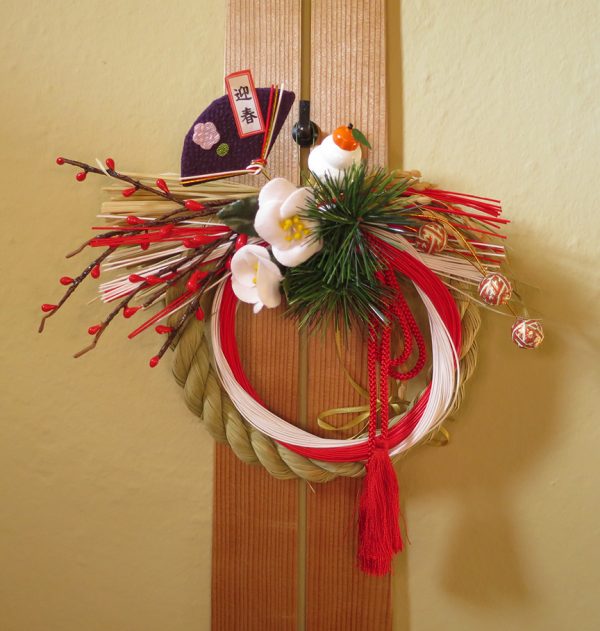 Christmas displays at department stores, grocery stores and train and subway stations are changed to New Year displays over night. The changes are made quickly but thorough. To the righ, you can see a display where various colored chrysanthemums and plum branches are put into bamboo stems, and placed on red carpeting in front of a gold screen. Gold and red are regarded as a happy color representing a lighthearted atmosphere for a new year.

This is a bamboo rake and a charm for raking in good fortune sold at shrines during new year holidays. Seven deities of good fortune drawn from Buddhistm, Shinto and Taoist traditions are on board a treasure ship. These deities are believed to give people longevity, musical and art talant and prosperity in business. It’s a popular custom for the Japanese to visit temples and shrines of these seven deities.

2012 is a year of dragon according to the Chinese zodiac cycle. Various kinds of dragon figurines can be seen everywhere.

Rice straw rope is hung at the entrance of a house. An orange and fern are put onto the sacred straw rope with white paper. In the center of the rope, Somin Shorai, a name of a Chinese man is written. According to the legend, he was the poor younger brother who offered a room for overnight to Gozutenno, a Chinese deity who is believed to get rid of a bad luck. Gozutenno’s rich older brother refused to offer a room to the Chinese deity when the deity asked him for a room overnight. As a result, the younger brother became rich and happy with the help of the deity. It’s believed if we put this name on the straw rope, we will be able to avoid bad luck.

There are small objects we place inside the house also. If we have a dream of eggplants, hawks or Mt. Fuji during the new year holiday, we can have happiness for the coming year.