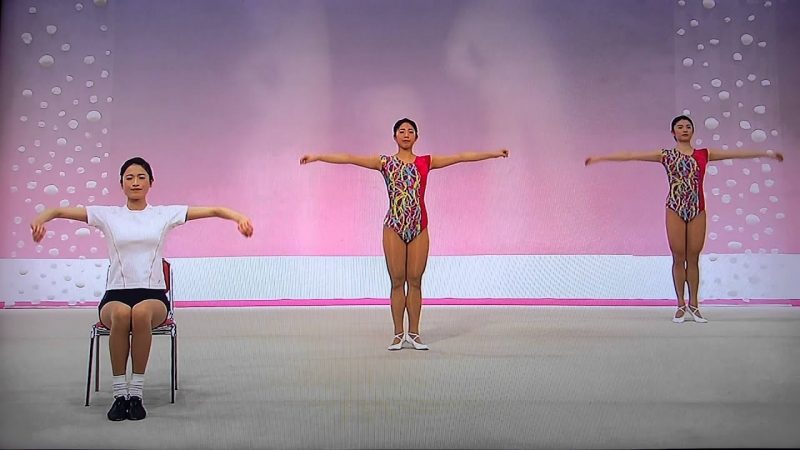 Today, every morning at 6:30AM, the radio program is aired. The program is only several minutes long with a piano accompaniment. The music is the same every day, and the exercises done to the music are the same every day. There are several programs aired on television every day, but there are different programs. On television, there are three instructors demonstrating how to perform the exercises  at a easy, medium or difficult level.

The first rajio taiso broadcast in 1928 was done to mark the start of the Showa era. It was inspired by American radio broadcasts which led listeners in physical exercises. Initially, the broadcasts only covered the Tokyo area. But one year later the broadcasts covered the entire country.

Schools were early adopters of the rajio taiso program. Many schools made the program a part of the school day. After learning the exercises, the school children went home and taught their parents. Because the exercises were simple and easy to do and remember, participation in rajio taiso quickly spread to workplaces and neighborhood associations. Broadcasts were suspended during World War 2, but were restarted in 1951 with updated exercises.

Today, 90 years after starting, rajio taiso is a part of daily life for millions of Japanese. Many public parks around the country will host daily broadcasts for anyone who wants to participate come rain or shine. Because rajio taiso is simple and can be done by anyone, even people in wheelchairs can and do participate. In the workplace, the timing is adjusted to the company’s schedule to match the start of the work day.

In the workplace, the exercises are said to help employees focus, and also creates a positive social atmosphere increasing workplace safety and teamwork. Because the exercises are easy to remember, and can be performed at different levels of intensity based on the ability of the person participating, anyone can participate.

For older people, since the program begins at 6:30AM, it creates a regular schedule for the day, as well as creates a positive social atmosphere.