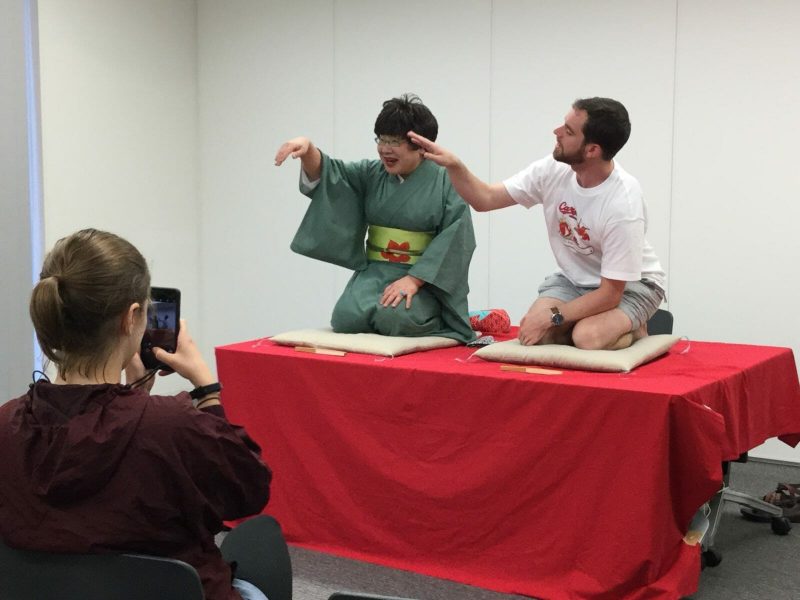 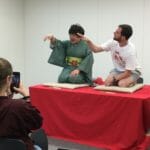 Rakugo is a form of traditional Japanese verbal entertainment. The lone storyteller dressed in traditional Japanese clothing kneels on the stage while telling a long and complicated comical (or sometimes sentimental) story. The story always involves the dialogue between two or more characters. The different characters are depicted only through a change in pitch, tone, and a slight turn of the head. In addition, a folding fan and small cloth is used as props. Rakugo has been described as a “sitcom with one person playing all the parts”.

Rakugo was created by Buddhist monks in the 9th and 10th century to make their sermons more interesting. Gradually the form turned from humorous narrative into monologue.

During the Edo period (1603–1867), thanks to the emergence of the merchant class, rakugo spread to the lower classes. Many groups of performers were formed, and collections of texts were printed.

Today there are several hundred traditional, documented Rakugo stories which are still widely performed. The stories feature comical and occasionally mischievous characters common to everyday life of Edo Period Japan. The stories vary in length from 5 minutes to 40 minutes and even longer. There are more than 700 professional Rakugo storytellers, and there are several theaters in Tokyo and Osaka that are specifically dedicated to staging Rakugo performances 365 days a year. Storytellers also perform in concert halls, temples and shrines, and can also be seen on Japanese television.

Recently, working with a local Rakugo in English club in Kyoto, we had the opportunity to offer a Rakugo in English performance to one of our tour groups. The response was so positive, we have decided to give it one more try. If the response from that performance is anything like the first, we will add these performances to select itineraries on a permanent basis beginning next year.