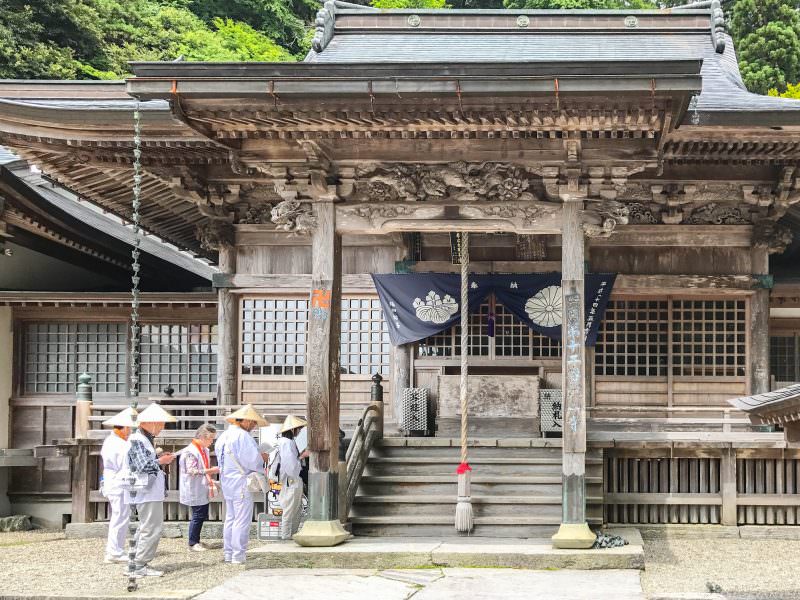 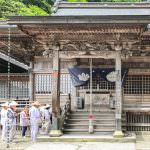 The plan for today is to visit Temples 11 to 17. We include a walk from Temples 13 to 17 on many of our escorted tours, so I have walked these temples a number of times in the past. I started the day by driving to Temple 11 (Fujiidera). From my hotel across the street from the Tokushima train station, it was about a 45 minute drive.

Fujiidera (Temple 11) can be found at the end of a 700-800 meter narrow road with numerous blind corners, and is located at the base of a heavily-forested mountain. Kobo Daishi founded this temple, and carved the main statue which is registered as a National Treasure, the highest ranking of Japanese antiquities. The temple complex has been destroyed by fire numerous times, but the main statue has always escaped damage. Therefore, it is a popular object of worship for those who wish to escape disaster. The temple converted to a Zen temple during the Edo Period, and today is one of only three Zen temples on the pilgrimage.

On the hillside directly behind the temple, there are 88 monuments, one for each temple on the Shikoku 88 temple pilgrimage. If you stop in front of each monument, it has the same effect as performing the actual pilgrimage.

Before I started the pilgrimage, I had purchased two guidebooks with numerous tips and hints for those driving the pilgrimage (in Japanese of course). For the drive from Temple 11 to Temple 12, both guidebooks included a warning not to use a specific route between the two temples. When I entered the destination information into the car’s GPS, it did select that route as the first option. I thought I had changed the GPS to an alternate route, but I guess I didn’t. And I ended up taking the route both guidebooks warned should not be used. I have driven many narrow and winding roads in Japan before, but never anything like that before. All I will say is I never want to do that again, and leave it at that.

Shosanji (Temple 12) is the first true mountain temple on the pilgrimage. Located at 800 meters above sea level, it is at the end of a long narrow road. Kobo Daishi visited this temple to perform ascetic training. However, he found a serpent had set fire to the entire mountain. While chanting sutras and under the protection of a Kokuzo Bosatsu statue, he was able to climb the mountain and confine the dragon in a cave. The cave, which remains today, can be found on the way to the Inner Sanctuary.

I found the atmosphere of the temple to be very pleasant. At a similar altitude, and with its many large cedar trees, it reminded me of Koya-san. The walk from the parking lot to the temple was also quite enjoyable. It was a 300 meter walk along a steep hillside with beautiful views to the valley below, and numerous Buddhist statuary. There was an excellent Shaka Trinity grouping with a Shaka Nyorai (Historical Buddha) and a Fugen Bosastsu and Monju Bosatsu. There was also a reclining Buddha, which is uncommon in Japan.

Temples 13 to 17 are back in the urban sprawl of Tokushima City after leaving Shosanji in the mountains. They are all located on the opposite side of the mountains from Temples 1 to 10. Jorakuji (Temple 14) has one of the most unusual courtyards of the entire pilgrimage. Where most courtyards are pavement and gravel, and beautifully landscaped with gardens and ponds, the courtyard here was built on an uneven rock bed.

Many disabled and crippled people visit this temple to benefit from the temple’s healing power. Chopsticks are sold here as souvenirs. Called chōmeibashi, they bring longevity to their users. It is said that if a diabetic prays here and drinks the boiled leaves from the yew tree next to the main hall, they will be cured.

The main hall of Kanonji (Temple 16) was undergoing renovations when I visited there, but there was a place set aside for pilgrims to perform their prayer services. Some say this temple was first built in 741 by Emperor Shomu to promote Buddhism, and some say Kobo Daishi founded the temple. On the temple grounds there is a picture of a 19th century woman on fire. The legend states the woman, named Shiyo, had beaten her mother-in-law in the past with burning sticks. She burned herself here when trying to dry her hakui (coat) over an open fire. She realized this was Kobo Daishi punishing her for the sins of her youth and she repented her sins. Shiyo, herself, donated the painting to the temple in the hope this would help others from repeating the same mistakes.

Idoji (Temple 17) was a little noisy while I visited there due to the construction of some kind of new building there. The temple was founded by Emperor Tenmu and got its name from when Kōbō Daishi dug a well overnight with just his staff to provide a water source for the local farmers, which is how the temple got its name (Well Temple). It is said that if you can see your face in the water at the bottom of the well you will have a good future. If you can’t, you will meet with misfortune within a few years. I was able to see myself, so I am safe.

I’m often asked whether it is necessary to understand Japanese to walk the pilgrimage. I have not walked the entire pilgrimage, but I have walked enough of it. My answer is a qualified no. It probably isn’t necessary, but I don’t think I would recommend trying it. If you are able to speak and read at least a little bit of Japanese, it will be a tremendous help and will make things much, much easier. The pilgrimage is hard enough without adding a language barrier.

By this time, I have driven enough to be able to answer the same question for driving the pilgrimage. While it is not necessary, I don’t think I would recommend trying it. In some ways, driving adds other complications. You will be forced to drive very narrow streets in residential areas and in the mountains. This makes it difficult to stop and determine the correct route to take sometimes unless you are able to quickly read Japanese signs. And if you are not accustomed to driving on the left side of the road, it can be quite intimidating. I have done a lot of driving in Japan on our Rail and Drive tours, and I am now OK with this and understand the driving courtesies in Japan. But I remember driving on narrow mountain roads during this day and other days thinking how the road was barely wide enough for a car, when I met 60 passenger tour buses coming from the opposite direction.

The first day, I had trouble remembering what to do, how to say prayers and the correct prayers to say at the temples. But by this time, I had gotten into a routine, and it was becoming easier.

I had originally scheduled two more days on this trip, but I had to cut my first trip short because my bad hip was bothering me and I was having trouble walking. So I cut my trip short and returned to Kyoto.