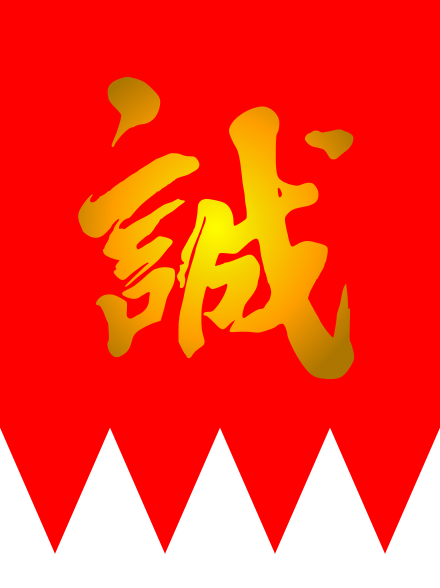 The late Edo Period and early Meiji Period (approximately 1855 to 1875) was a very chaotic time in Japan and Kyoto. In 1854, the Tokugawa Shogunate was accused by fuedal lords around Japan of caving in to demands from Commodore Perry to open the harbors to American whaling ships. This was seen as an act of weakness, and many people began to call for the end of the Tokugawa Shogunate and the reinstatement of the emperor of Japan as the supreme power of the land.

In 1863, the last Tokugawa Shogun visited Kyoto. Numerous men were drafted to help guard the Shogun while he was in Kyoto. Thirteen of these guards stayed behind in Kyoto after the Shogun left, and were the beginning of the organization that eventually became known as the Shinsengumi (The literal translation of Shinsengumi is “newly selected corps.). Bankrolled by the Aizu clan in Wakamatsu (today’s Fukushima prefecture), their numbers swelled to several hundred at one point. But the Shinsengumi were finished, when in 1868, Kondo Isami, the leader of the Shinsengumi was beheaded in a public display. (Since he was from a farm family, he was not allowed to commit ritual suicide as a Samurai would have been allowed to even though he had held a prominent position.)

The Shinsengumi has been romanticized in numerous manga, anime and movies. Some historians believe them to be the stabilizing force they were originally designed to be during an unstable period. But most historians think of them as cold-blooded assassins who killed anyone who called for an end to the Tokugawa Shogunate. They wore hakama with a distinctive design that gave them instant recognition. The Shinsengumi adopted a set of rules, all of which could be identified under one word: loyalty. Anyone in the Shinsengumi who was found guilty of an infraction of these rules was usually put to death. Most of the members of the Shinsengumi were from the farmer, merchant and tradesman classes, rather than from the Samurai class.

There are still a number of places and things you can still see in Kyoto that are related to the Shinsengumi. Here are several of them.

The Yagi Residence is often considered to be the unofficial headquarters of the Shinsengumi. In the early days of the Shinsengumi, there were originally three factions, which eventually was reduced to two factions. There was a tremendous amount of friction between these two factions. In September 1863, Kondo Isami was given the approval by the lord of the Aizu to assassinate the leader of the other faction, which was done at the Yagi Residence by three swordsman loyal to Isami. Today, you can still visit the original Yagi Residence. You can only go inside the residence with a tour group (The tours are in Japanese only). On the tour, you can see sword marks on the wooden beams made during the attack by the swordsmen. The Yagi Residence is located near Mibu Temple (see below) west of the Shijo and Horikawa intersection.

The “Ikedaya Incident” was perhaps the highlight of the Shinsengumi. Although, there are some shadows over this incident. It was thought that samurai from the Choshu and Tosa clans (the major opponents to the Shogun and the Shinsengumi in Kyoto) were using the Ikedaya Inn as a staging point for suspicious activities. In an effort to get information as to their intentions, the Shinsengumi arrested one of their members.

While nothing can be verified, the stories of the interrogation are nothing short of brutal. It is said the prisoner was hung upside down by the ankles. Holes were drilled into the bottom of his feet into his heel bones, and lit candles were placed into these holes allowing the hot, melting wax to drain into the holes. As a result of this “interrogation”, the prisoner told the Shinsengumi that the Choshu and Tosa clans intended to set fire to Kyoto, and to kidnap the feudal lord of the Aizu clan. Whether or not this was true is still debated today. On July 9, 1964, the Shinsengumi raided the Ikedaya Inn, saving Kyoto and restoring peace to Kyoto (according to the Shinsengumi). The only thing remaining as a reminder of the Ikedaya is a stone marker where the inn was located near the corner of Sanjo and Kawaramachi in the north eastern section of central Kyoto.