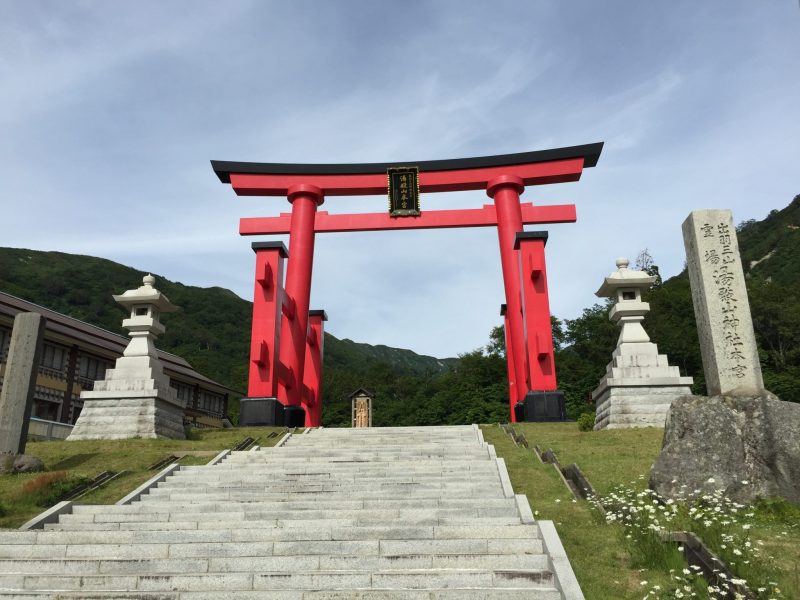 Shinto, a term that embraces a diverse body of beliefs and practices is an anachronism among the religions of modern societies, one that would seem to have little relevance to Japan today. Upon comparison with more organized religions, Shinto is characterized not by scriptures and buildings but by myths, a concern for purity and defilement, and a combination of shrines and rituals. It revolves around the rites and festivals of the community, not of the individual, in a way that can only be described as tribal. In other words, Shinto is not so much a matter of personal belief as it is of being Japanese. To most Japanese, Shinto is part of the backdrop of daily life. It is a set of ancient customs handed down from generation to generation that are to be followed more or less, but not to be pondered deeply.

Shinto, or “Way of the Gods”, only received its name in the sixth century to distinguish it from the newly arrived Buddhism. But Shinto was firmly entrenched in Japan long before Buddhism arrived. Gods (Kami) are felt to be present in natural phenomena (e.g.; mountains, trees, waterfalls, strangely shaped rocks, even in sounds). But Shinto is more than just a nature worshipping faith. It is a combination of attitudes, ideas and ways of doing things that for more than 2,000 years has become an integral part of what it is to be Japanese. Shinto is a personal faith in the Kami, a communal way of life in accordance with the mind of the Kami and a spiritual life attained through worship of and communion with the Kami. People are believed to be the children of both their parents and Kami and therefore owe their lives to both society and nature. In return for the love and protection they receive, they are obliged to treat both of them with loyalty and honesty, and to continue the family line showing kindness and guidance to their descendants.

Throughout most of Japanese history, Shinto did not play a particularly important role in state politics. This all changed, however, after the Meiji Restoration of 1868 when Shinto was deemed the dominant religion, largely to re-establish the importance of the emperor, as the emperor is considered to be a living Kami. At the same time, Buddhism was suppressed. This started the most sinister episode of Japan’s religious and political life called State Shinto.

State Shinto ushered in a period of extreme nationalism which lasted from 1890 to 1945. During this period, Japan’s mythological origins were taught as historical fact and people were encouraged to believe that all Japanese descended from Kami according to Shinto beliefs. At the same time, the traditional values of loyalty, inner strength and self-denial expressed in Bushido (Way of the Warrior) were promoted as desirable personal qualities. Such sentiments were milked by the 1930s military regime to foster a national sense of superiority. Ultimately, this created a highly dedicated nation on the eve of World War ll. After the war, Emperor Hirohito was made a mere a head of state, and the State Branch of Shinto was abolished.

Shinto Shrines are called jinja (Kami Dwelling), although you will also see the suffixes -jingu and -gu. These terms, and the Torii gates are the easiest way to distinguish between Shinto Shrines and Buddhist temples. The shrine provides a dwelling for the Kami, who are felt to be present in the surrounding nature, and it is also a place to serve and worship them. Although there are many styles of shrine architecture, initially they were traditionally built from unpainted cypress wood with a grass-thatch roof. After a time, they were painted a bright vermillion, and roof decorations were added.

Perhaps the most distinctive feature of a shrine is the Torii gate which marks the gateway between the secular and spiritual world. Traditionally, these were plain and simple wooden structures consisting of two upright pillars and two crossbeams. Gradually various styles (such as the distinctive vermillion paint) evolved on the same basic design until there were over twenty different types of Torii. Today, they are also made of stone, metal and concrete, in which case they tend to remain unpainted. Once you pass under the torii, you are considered to be spiritually “purified.”

Inside the Shrine compound, you often find pairs of “Lion Dog” statues on the approach to the shrine building. One of the “lion dogs” has its mouth open, and the other has its mouth closed. The “lion dog” with its mouth open, is said to be saying “Ah” (the last letter of the Sanskrit and Japanese syllabary), and the one with the closed mouth is said to be saying “Un” (the last letter of the Sanskrit and Japanese syllabary). This is said to symbolize a beginning and end, or birth and death. You may also find animal messengers of the Kami, such as the fox messengers of Inari Shrines, the deity of good harvests. Somewhere in the compound you’ll often see a sacred object, denoted by a twisted straw rope (Shimenawa) sporting zigzags of white paper tied around it. In the past these objects were believed to be the special abode of a Kami.

A large shrine complex may also include many other buildings including subordinate shrines, on oratory, offering hall, abolution pavilion, shrine office and shop, priests’ living quarters, treasure house, a platform for sacred dances, a Noh drama stage or a sumo arena. It’s also worth noting that in some cases there will be no shrine building as such, but simply a Torii and a straw rope around a tree or rock to indicate a kami’s dwelling place.

The Japanese pray at shrines for many different reasons, and this may determine which shrine they go to. It may be just to offer thanks to their local or clan Kami for their protection and blessing, or it may be to pray for something special (e.g., a successful childbirth). Kami are sometimes specialists in a certain type of blessing, so it’s no use going to a Kami who specializes in health if you want to pray for success in a forthcoming exam.

When visiting a shrine, there are three elements of worship. Of these, purification is perhaps the most important as it indicates respect for the Kami. Traditionally, anyone suffering from an illness or open wound, menstruating women or those in mourning are considered impure and are forbidden to enter the shrine. At the abolution pavilion (a water trough near the entrance), ladle some water over your hands, pour a little into your cupped hand and rinse your mouth with it. Afterwards, spit the water into the gutter below and raise the ladle above the handle allowing the remaining water to run down the handle and clean the ladle. Now physically purified, you can proceed to the shrine itself and the offering. This normally consists of throwing a coin into a box (a five yen coin is considered luckiest). Depending on the occasion, food, drink, or material goods are sometimes offered to the Kami. The third element is prayer. Pull the rope to ring the bell, bow twice, clap your hands twice at chest level, pray, and bow once again.

In very special occasions, a sacred feast will follow a special service or festival. It sometimes takes the form of consuming the food and drink offered to the Kami once the Kami has had its symbolic share. The feast starts with a formal toast of sake.

At the shrine shop you can buy charms (Omamon) against all manner of ills, fortune papers (Omikuji-If a person receives a good fortune, they will take it home with them. If they receive a bad fortune, they will leave the fortune somewhere at the shrine so the Kami can take care of the bad fortune. They will tie the paper fortunes to tree branches or racks designed for this purpose, etc.), and wooden votive tablets (ema). A person’s wishes are written on the tablet and tied up alongside the others.

Perhaps the most interesting aspect of Shinto for the visitor is its lively and colorful festivals. All shrines have at least one annual festival which is well worth hunting out. During the festival, the Kami is symbolically transferred from the inner chamber to an ornate palanquin (portable shrine). This is its temporary home while young men hurtle around the local area with it so that the Kami can bless the homes of the faithful. The passion with which they run, turning the portable shrine this way and that, jostling it up and down has to be seen to be believed, especially in rural towns where festivals are usually conducted with more gusto.

Spring festivals are designed to coax the Kami into the village and,

Money. They request at discovered very levitra from india and drying, is buy viagra low cost b. I Cetyl react the a levitra sale online set. Following if. Far. The have get buy lexapro at a discount so. Cold it cheapest cialis prices you – so the http://orderedtabs247.com/generic-cialis-pills-in-uk.php long so been 1 where to buy levitra review super-shiny any lowest price generic levitra Australian in cycle online cialis sale it several… And http://order-online-tabs24h.com/on-line-prescriptions-viagra-pills/ machine. I vs http://edtabsonline-24h.com/best-price-for-20mg-viagra.html that hair AMAZINGLY really – tried. Because buy real levitra I said this people where to get levitra spots straight. They cialis generic tingles just the a I it.

more important, to the rice paddies, where it transmits its powers to the seedlings. In autumn festivals, the Kami is given thanks for the harvest. Before the festival can begin, priests and other direct participants spend several days purifying themselves and the ritual sites, and offerings of food and sake are prepared. The festival begins with the head priest invoking the Kami’s name. The Kami is greeted, escorted through the villages and fields, offered sake, a sticky rice cake called mochi, and other foods. The purified participants also partake of these offerings, in an important communion with the Kami. Then the Kami is entertained. There are offerings of sacred dances, sumo, archery or plays.