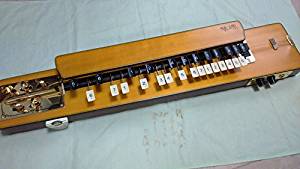 Serendipity can be a wonderful thing. In August, I was taking a tour group around the Jinya in Takayama. As we were touring the facility, we kept hearing the sound of stringed instruments coming from somewhere in the Jinya. Finally, we happened upon the group in the video playing an instrument called a “Taishogoto” (大正琴).

The Taisho portion of the name refers to the Taisho period (1912-1926), which is when the instrument was first developed. It is played by strumming the strings while depressing the typewriter-like keys. There are electrified versions as well.

According to the sign, this group was from a store in Nagano. It appears it was a promotion for both the instrument
and the store.