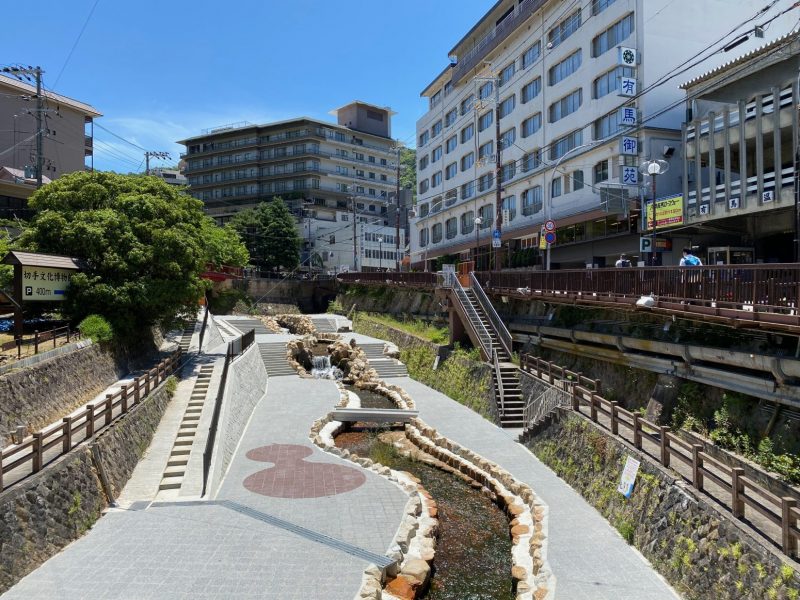 Arima Onsen is one of the most well known and popular onsen in Japan. It is one of Japan’s oldest onsen. In the ancient era, the mythology is said that ancient gods found Arima Onsen. According to mythology, three injured crows bathed in the spring water in Arima, and were completely cured. Japan’s oldest historical record “Nihon Shoki” described the first visit of Emperor Jomei in the year 631.

Arima is a famous onsen town within the city limits of Kobe, but on the opposite side of the Mount Rokko mountain range from the city center. Located among steep 350 – 500m mountains, the narrow and winding streets lined with old traditional-style shops and restaurants run through the old town, and the intricate terrain grants the town a unique atmosphere. Even though the town lies in a natural mountain setting, yet is close enough for Kobe, Osaka and Kyoto residents as an easy and popular day trip or weekend getaway.

After the opening of the Kobe port 150 years ago, numerous foreign visitors visited the hot spring, and built western style hotels and facilities in the town. This combination of Japanese tradition and western culture gave Arima a unique and exotic atmosphere, which attracted visitors to the historical retreat and spa resort from all over the world. In recent years, the development of the expressway and public transportation allows easy access from Kobe in 30 minutes, from Osaka and World Heritage site Himeji Castle in an hour, and from Kansai International Airport and Kyoto within two hours.

Arima is blessed with three types of very different and unique waters not typically found at other onsen around Japan: one type of “Kinsen” (gold spring) and two types of “Ginsen” (silver spring). Before the Meiji era, the lack of technology meant that Arima only offered one source of hot spring: Kinsen. But, after World War II, the need to boost tourism around Arima led to the excavation of more hot spring sources when the Ginsen springs were found.

The Kinsen contains high levels of iron and salt. As the iron and salt contents bubble up from the ground, the water is clear. But the interaction between the iron and the air oxidizes the water and changes the color of the hot spring to a “golden” reddish-brown. In other words, the water instantly rusts when exposed to the air. Thanks to the high iron and salt contents, it is said to help chronic joint and skin diseases such as neuralgia and arthritis. The Kinsen is also popular among women as it helps keep the skin moisturized and prevents the limbs from feeling cold.

The two types of Ginsen are a colorless carbonic spring water, and a natural and mildly radioactive radon spring water. Carbonic springs are best known for their ability to boost blood circulation and the metabolism, help with the removal of lactic waste and eliminate edema. The colorless and odorless radon spring water contains minute amounts of radon and releases small doses of radioactivity which is beneficial to the body, promoting cell activation, boosting the immune system and relieving muscle aches and fatigue. When ingested, the Ginsen’s water can help treat gastrointestinal discomfort. When inhaled, it can help relieve suffering from bronchial diseases.

Arima Onsen’s location is certainly a big advantage. It is only a 30 minute drive from Sannomiya station, the main train station in Kobe, to the onsen. The central part of the town is small enough to walk around, and has a number of narrow streets lined with older, traditional Japanese style homes, shops and restaurants giving it a unique feel. And the small public bath houses adds to the atmosphere. This makes Arima Onsen a favorite getaway for the suburban-weary citizens of Osaka and Kobe.

The only real negative, and it is a minor one, is that Arima Onsen tends to be a little more expensive. But it is well worth it. 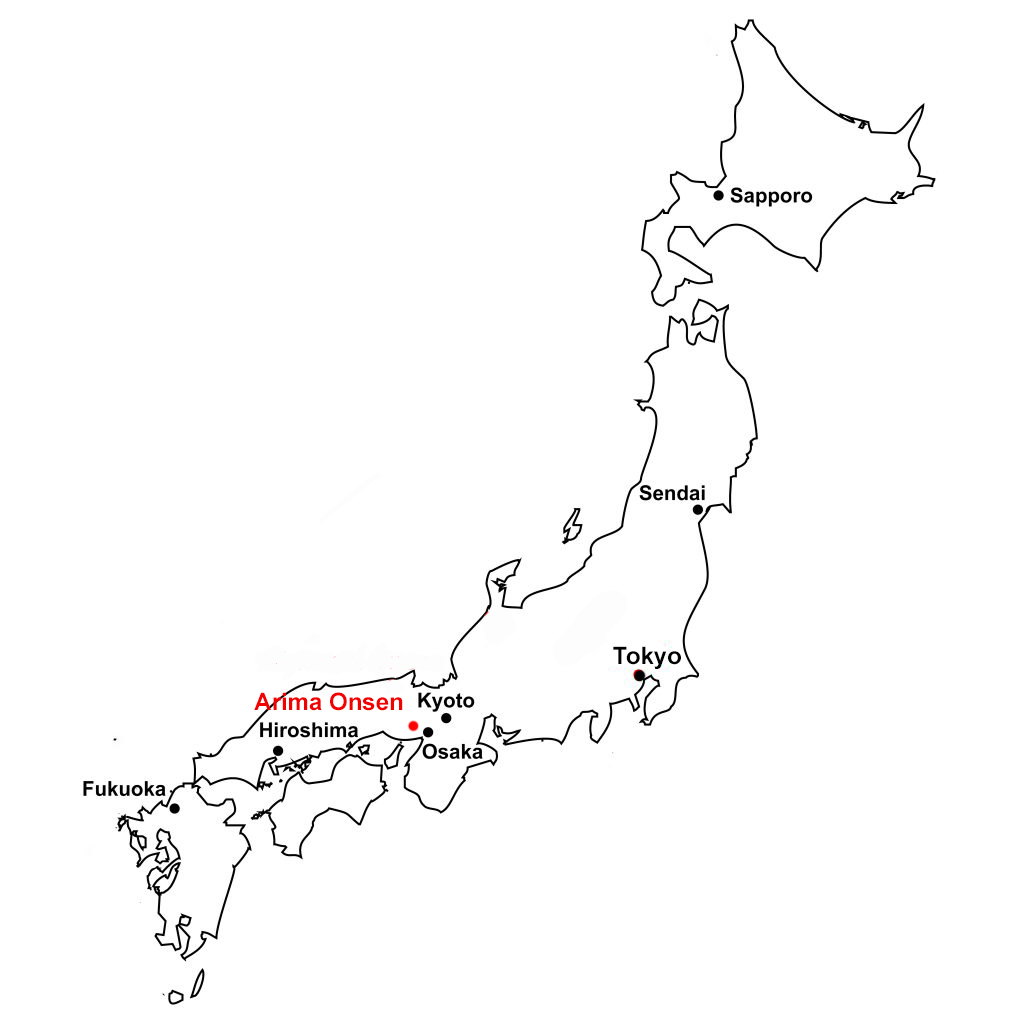 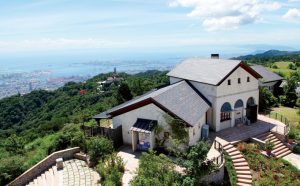 From the Rokko Arima Ropeway, which connects the top of Mt. Rokko with Arima Onsen in about 12 minutes, passengers can enjoy close-up views of the dynamic beauty of Mt. Rokko, where nature’s expressions change as the seasons turn.

Mount Rokko, at 931 meters (about 3050 feet) is the highest peak in the Rokko mountain range, which provides the pleasant green backdrop to the city of Kobe. Panoramic views of the heavily urbanized Hanshin region (Kobe and Osaka) can be enjoyed from the mountain and are particularly spectacular around sunset.

Various small tourist attractions can be found on Mount Rokko, including a botanical garden, a music box museum, a pasture with flowers and sheep, Japan’s first golf course and Rokko Garden Terrace, a tourist complex with a few restaurants, shops and an observation deck.

A circular bus line (running in clockwise direction only) connects the various attractions with the top stations of both the Rokko Cablecar (going to central Kobe) and the Rokko Arima Ropeway (going to Arima Onsen).

For something different, you can take the cablecar, bus and ropeway from Kobe to Arima Onsen (or reverse). From Sannomiya or Hankyu Umeda Stations, take the Hankyu Kobe Line to Rokko Station. From there it is a ten minute bus ride on bus number 16 to the base station of the Rokko Cablecar. The cablecar ride up the mountain takes 10 minutes. From the top of the cablecar, it is a 25 minute bus ride to the top of the ropeway. There are numerous places to stop along the way between the two stations. 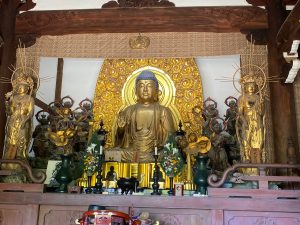 In ancient times, before enjoying the hot springs, visitors were required to visit the temple. 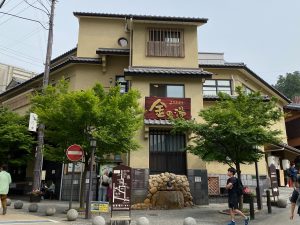 Open: 8:00 to 22:00 (Admission ends at 21:30)
Closed: 2nd and 4th Tues each month (Wed if Tues is a holiday), Jan 1
Admission: 650 yen
Located at the center of town, Kin no Yu is the larger of Arima Onsen’s two public bath houses. It features two indoor “gold” water baths of varying temperatures for each gender. Outside the bath house there are a free foot bath (ashiyu) and a drinking fountain fed by thermal waters. 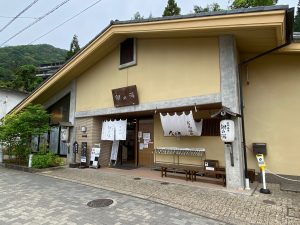 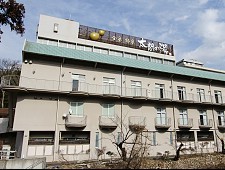 Hours: 10:00 to 23:00 (entry until 22:00)
Closed: Small number or irregular closing days
Admission: 2400 yen (2600 yen on weekends and during holidays)
Part of the Arima View Hotel, the Taiko no Yu is a large modern hot spring facility, featuring a wide variety of indoor and outdoor baths filled with both of Arima’s waters. It includes a replica of a historic bath found at the onsen museum, large pots and fragrant saunas. In addition, there are massage services, restaurants, shops and rest areas. 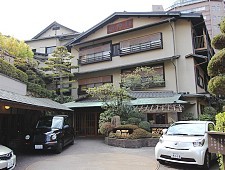 For Osaka-style okonomiyaki, this is the place to go. The grills are large, and it is a good place to meet with other tourists (mainly Japanese). 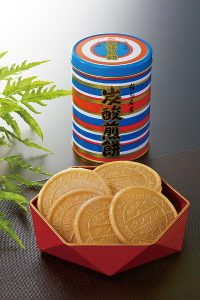 Tansan Senbei is a wafer-thin cracker made by adding sparkling spring water from the hot springs, and it is a specialty product of Hyogo prefecture. There are many different flavors from very sweet to refreshing, depending on the store you go to. Unlike general hard-baked rice crackers, it features a crisp wafer-like texture. It will be a great gift to take back home as a souvenir.

Onsen manju, a dumpling steamed in mineral water, is probably the signature sweet people think about when they look for a gift to take back from any onsen. 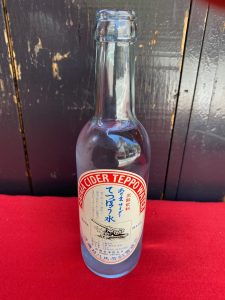 Stocked in chilled cabinets and shops all over the town, this perfectly limpid, sweet and effervescent drink is named after the Japanese word for ‘Rifle’, or ‘Teppo’. The association becomes obvious once you have tasted its powerful levels of fizz. The bottle label even depicts a cannon, and it is said that back when the bottles were corked rather than capped, Teppo’s potent levels of carbonation had the side effect of causing the corks to fire open, just like cannon balls!

Founded in 1191, it is the oldest ryokan in Arima Onsen. The ryokan has its own springhead providing high quality of  onsen to the guests. Standing beside the Taki River, it features outdoor hot-spring baths and traditional in-room meals. The Japanese rooms have traditional futon bedding and a minibar. The 20 rooms at Arima Onsen Tosen Goshobo include tatami (woven-straw) floors and shoji paper screens. Guests can relax at the seating area and enjoy the zen atmosphere with a cup of green tea.

It is located on top of a hill, surrounded by the three mountains of Arima Onsen, boasting great views. It has an indoor and outdoor bathing area known the size and variety of baths. The Kaiseki-style cuisine is popular, incorporating seafood the Seto Inland Sea and Kobe Beef.

The bus is the most direct and easiest way to get to Arima Onsen. There are numerous buses from Osaka (Hankyu Umeda and Shin Osaka stations) taking about 60 minutes. The bus from Kyoto station is about 90 minutes.

There are trains from Sannomiya Station and Shin Kobe station. But you will have to transfer as many as 2 or 3 times, making it a little complicated. Plus it will take about 75 minutes, making the train longer than the bus.

See the description under the Arima Onsen Ropeway/Mt. Rokko section. This is a different and unique way to get to the onsen. You can even make a whole day out of the trip.