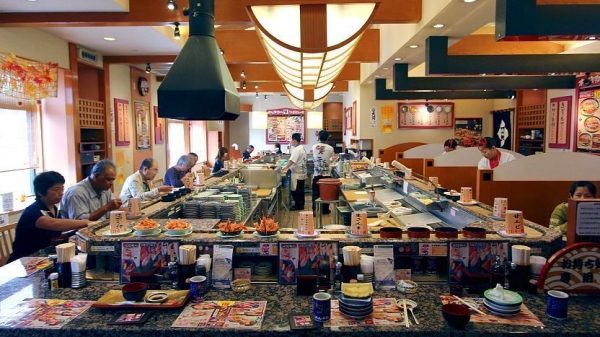 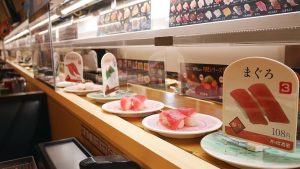 Kaitenzushi, or conveyor belt sushi, is a convenient, affordable and fun type of sushi restaurant characterized by the conveyor belt that winds through the restaurant. The conveyor belt carries plates of sushi past the diners, who can take whatever they wish. Each plate is color coded, and the color indicates the cost of that plate of sushi. Prices normally range between 100 Yen to 500 Yen. A description of the plates with their accompanying prices can be found on the menu or on signs placed around the restaurant. Kaitenzushi tend to be considerably cheaper than conventional sushi-ya., and can be found across the country. Seating is usually provided by counter seats along the conveyor belt, but many establishments also offer tables.

If you don’t see anything that looks good, you can make special orders. If the sushi chefs are located within the conveyor belt, you can ask the chef for your preferences. Or, larger kaitenzushi restaurants also have touch screen displays for ordering specific dishes which are delivered on a separate conveyor belt or by waiters.

What to do at a Kaitenzushi restaurant