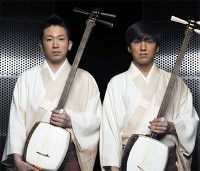 Ryoichiro Yoshida and Kenichi Yoshida were born in the Hokkaido onsen town of Noboribetsu in 1977 and 1979 respectively. Both began learning to play the shamisen at the young age of 5. The Shamisen can best be described as a three-stringed banjo, that is played with a plectrum called a bachi in Japanese. The Shamisen has been traditionally used as an accompanying instrument for kabuki and bunraku, and traditional singers and dancers. The origins of the Shamisen date back 400 years, and it is thought the first Shamisen came from Sakai near Osaka.

The brothers debuted profesionally in 1999, and their first album sold more than 100,000 copies in Japan, surprising even them. They have since released numerous albums, drawn interest from international audiences and performed in concerts around the world. Their music is a fusion of the rapid and percussive tsugaru-shamisen style and western music styles. Their songs include more traditional songs featuring shamisen music only (see the “Kodo” video below), to songs featuring shamisens accommpanied by other instruments such as electric guitars, drums, orchestras and synthizers among others (see the “Rising” video below). They are able to make the shamisen seem like it was made to be played alongside these instruments.

I invite you to watch and listen the videos below as an introduction to the Yoshida Brothers and their music. Personally speaking, I find their music has a high energy level and raw power that I can’t get enough of. I hope you will enjoy it also.