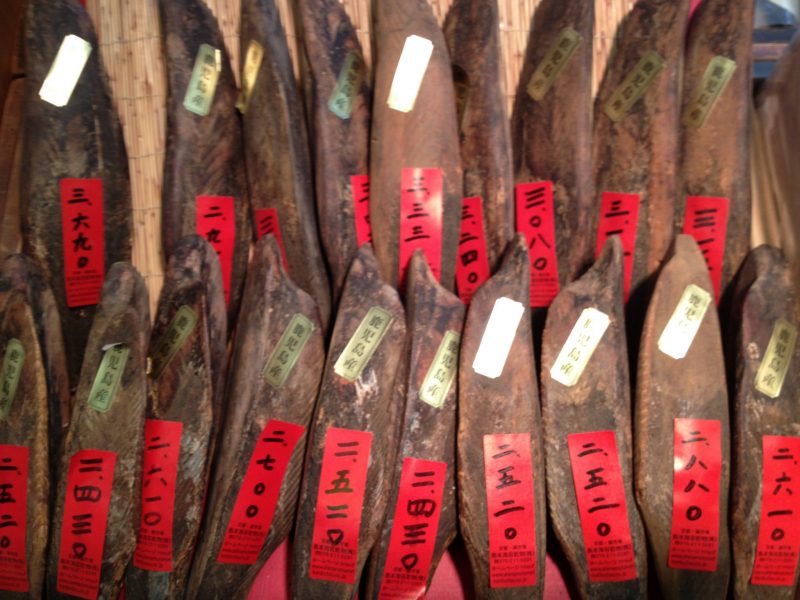 We often get questions from people who are interested in taking our tours if it is possible to avoid fish in their meals.  There is so much more to Japanese food other than sushi and sashimi, but escaping fish all-together is near to impossible in Japan.  After all, it is a staple in Japanese cooking and the Japanese eat more fish per capita than any other country in the world!  You can avoid eating the actual pieces of fish, both raw and cooked, but there are many things that you may eat and not even realize that there is fish in it. Here are a couple of very common Japanese food ingredients that you may be unaware of. 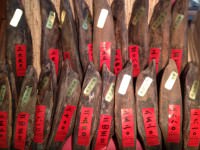 Katsuo after drying and pickling.

Dashi is a soup and cooking stock, and is a fundamental part of Japanese cooking. Dashi is the base for miso soups, clear broth soups, noodle soups, is added to many sauces and is used for cooking and simmering many different foods to add flavoring. The most common form of dashi is a simple broth or stock made by heating water containing konbu(kelp) and katsuobushi (shavings of dried and fermented katsuo (a small cousin of the tuna)) to near boiling, then straining the resultant liquid. It is used in Japanese cooking to accentuate savory flavor (umami). Dashi is also mixed into the flour base of some grilled foods like okonomiyaki and takoyaki.

It is difficult to explain what fish essence is, but it could best be compared to bouillon.  It is made by boiling fish bones (and other fish parts) along with vegetables and seasonings, and then dehydrated into a powder form. This powder is then added to numerous foods to add flavor, particularly soups.

So in short, can you avoid fish in Japan?  Large pieces of fish, yes, but all fish products, no.  If you want to visit Japan and are not able to eat any fish products, your only option may be only western-style food.  Food is an important part of travel, and we want to you to experience the Japanese cuisine to its fullest. So as long as it’s not an allergy, we encourage you to go bey0nd your comfort zone.  Have fun, and enjoy!