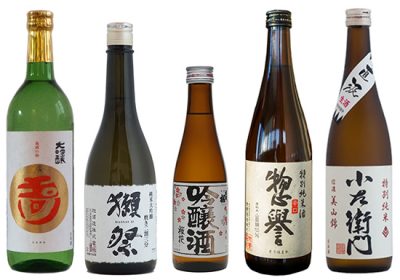 In this installment of our discussions on Sake, we will discuss the basic ingredients of Sake, the different kinds of ingredients and how they affect the final result. These main ingredients include:

This installment will concentrate on rice and water, the most important ingredients by volume only. Yeast and koji will be discussed later.

Rice has always been a staple part of the Japanese diet. Up until roughly 50 years ago, rice was in short supply, with production volumes unable to meet domestic demand. Thus, the rice available for sake brewing was understandably limited, and brewing itself was confined to the winter months, when lower temperatures and cleaner winter air provided the best conditions for brewing and storage (natural refrigeration helped keep sake fresh for consumption months after it was brewed). Such restrictions made large-scale brewing unfeasible, and resulted in regional sake brands that closely matched the local climate, cuisine, and tastes of the local population. These fairly distinct regional styles can still be identified today.

There are several varieties of rice used to make Japanese sake, and each type yields specific flavor profiles. Keep in mind that these nine types of rice are only part of the battle. How sake is brewed and the water used are the other parts of the story. Further, there is a massive range of styles and tremendous overlap across the board. Finally, the degree of rice milling plays a major role in the final product.

From Hiroshima. Earthy undertones, usually in the background, with a rich flavor.

From Tottori and Shiga. Soft and deep, with complex background activity when brewed right.

From Niigata and Yamagata. Rich and flavorful and a bit drier and more acidic than other rice types.

From Yamagata and Niigata. Complex, not so dry, midly fragrant.

Sake is, at first glance, a simple creation. The main ingredients are water, rice, koji, and yeast. Pristine and uncomplicated. But things get a bit more involved just beneath the surface. Water is an appropriate analogy of the apparently simple yet inherently complex nature of sake brewing.

The Role of Water

Sake in its completed form is about 80% pure water. Before it arrives at that final stage, however, it is exposed to large amounts of water in each step of the brewing process. The rice is washed, rinsed, and soaked before it ever gets close to the steaming process. Water is then added to the fermenting mash in the tanks at each of the three additions of rice, water and koji. Finally, a little water is almost always added at the end to bring the alcohol down from the naturally occurring twenty percent or so to around sixteen percent.

All together, the amount of water that goes into a bottle of sake adds up to be more than 30 times the weight of the rice used. It therefore deserves a bit of attention.

Most of the traditional sake brewing locations, like Kobe, Fushimi (Kyoto), Saijo (Hiroshima) and Aizu-Wakamatsu (Fukushima) came into existence partly due to the abundant supply of good water in the region. There was no chemical analysis available hundreds of years ago, but the final product told the story and everyone rushed to set up shop where success had been proven.

The most famous example of this is the water that rushes down from Mt. Rokko in Hyogo Prefecture into Nishinomiya and Kobe. Known as “Miyamizu,” sake made using this water was immensely popular among the elite. This led to the region having more breweries and producing more sake than any other place in Japan, a statistic which still holds true today.

Eventually science caught up to intuition and experience and found ways to determine what exactly makes “good water” for sake brewing, as well as what does not. The results of extensive research by sake-brewing research centers, which exist in almost every prefecture, have now become common knowledge to brewers.

There are a number of water elements whose presence is indispensable, without which certain steps of the brewing process would not proceed smoothly. There are also several things that are detrimental, and either impede the process or adversely affect the sake in other ways.

There are a number of elements and compounds whose presence is indispensable. In particular, potassium, magnesium and phosphoric acid are necessary to aid the propagation of the yeast, as well as in the proper development of good “koji”. If these are not present in sufficient amounts the yeast cells will not multiply as well or as quickly, throwing off the timing off of the entire fermentation so that it cannot be properly controlled.

One of the problems is that potassium is water soluble, and can be washed away during the rice washing and soaking processes. Phosphoric acid is generally attached to fat and protein molecules. It must be removed from these, broken by enzymes from the koji, thereby freeing it up to be used by the yeast. This shows how integrated the various aspects of the brewing process are.

The Bad and the Ugly

The biggest problem is iron. Iron will darken the color of sake and adversely affect its taste and fragrance. Also, as sake ages, the residual sugars react with amino acids present to change the flavor and smell, and the presence of iron hastens this reaction.

Manganese plays a different but equally negative role. When sake is exposed to light, in particular ultraviolet light, manganese promotes a chemical reaction that will discolor and de-luster the appearance of sake. In direct sunlight, this change can be seen in less than three hours.

Where Do Brewers Get Their Water?

Forgetting everything else, where do sake breweries get their water? More of it comes from wells than any other source. The stable temperature of deep well water gives it consistency, although the individual qualities of a well vary with depth and the land.

Rivers flowing from the mountains as well as lakes and other bodies of water are also used, but the changes in the environment over the last century or so have rendered many of these useless. Many breweries brag about their region’s “meisui” (famous water), insisting that it is one of the secrets of their fine brew.

Naturally, water can be chemically altered and synthetically produced to specifications, so many breweries take that route. Still others use local tap water, and filter it or alter it as is necessary to fit their needs.

As a general classification, water for brewing is often referred to as “kosui” (hard water) or “nansui” (soft water). Although both kinds of water have the potential to make good sake, the brewing methods are subtly different for each. The famous Miyamizu of Kobe is kosui, whereas nearby Fushimi water in Kyoto is nansui. Both Hiroshima and Fukushima have, in general, soft water.

Among sake brewers, water is more often referred to as “tsuyoi mizu” (strong water) and “yowai mizu” (weak water). This refers to how well the water promotes fermentation. And just because the water is “weak” does not by any stretch mean it is not suitable for brewing; it just indicates that the timing of certain steps will be different. Although the correlation is not completely direct, hard water is generally strong water.