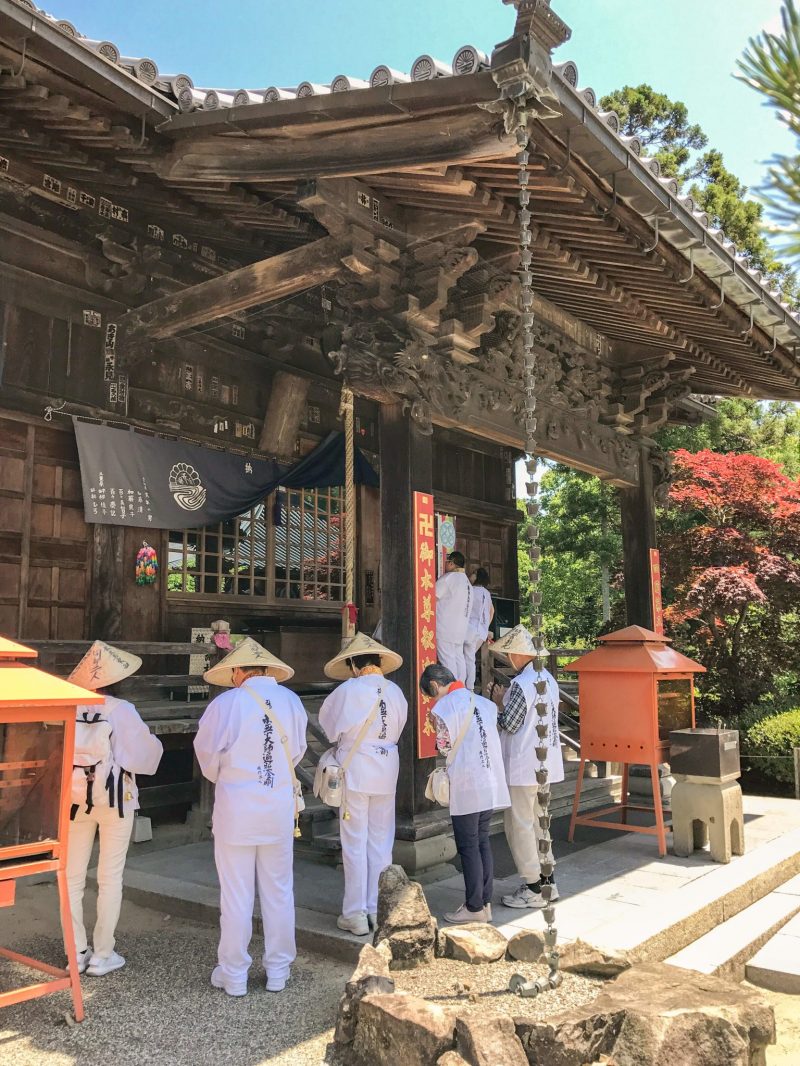 My plan for today on the Shikoku 88 Temple Pilgrimage was to visit Temples 1 though 10. If you look at a map of Shikoku with the temples shown on the map, you will see these 10 temples are very close together, heading generally west from Tokushima.

I started the day by driving from my hotel next to Tokushima station to Ryozenji (Temple #1), which was only about a 30 minute
drive. After arriving and parking the car, I stopped at the shop next to the parking lot selling all the items you need on the Shikoku 88 temple pilgrimage. A long list of items is needed for the pilgrimage, and I will cover that in later blogs. I already made some purchases from online web sites in Japan specializing in supplies for the Shikoku pilgrimage, but I made a few small purchases from the shop.  If you are not able to purchase anything prior to the start of the pilgrimage, no need to worry, they have everything you will need.

Ryozenji’s most notable characteristic is, well, it’s number 1. While it is not necessary to start here, many people do. Having said that, it is a very pleasant temple with a small pond filled with Koi and a statue of Kobo Daishi watching over the pond, a small pagoda and some interesting statuary. The main statue here is famous with high school students for promising academic success at the university level. Because it is number 1, everyone wants to visit the temple. So the temple was busy and noisy, which was not what I expected.

It was less than a 5 minute drive from temple #1 to temple #2, but it was like a different world. While Ryozenji was crowed, Gokurakuji was very quiet with not many people. It was also created by Gyogi in the eighth century. Kukai visited this temple and carved the temple’s main diety – the diety of light. According to legend, long ago it was difficult for fisherman in nearby Naruto Bay to catch fish because of the bright light from the main statue of the temple. To prevent this, the fisherman built a small artificial hill behind the main hall to block the light. Gokurakuji was also destroyed in the late 16th century.

In the courtyard in front of the main hall is a cedar tree said to be 1,000 years old known as the Cedar of Long Life that was planted by Kobo Daishi. If you pray while touching the tree you will be granted a long life. The tree is also popular with women for easing childbirth. The temple is known as the temple that grants easy childbirth and is dedicated to expectant mothers.

The first three temples are surrounded by urban sprawl, but temple #4 is located at the base of the mountains at the edge of town with a green forest behind it. Kobo Daishi founded this temple, and has been destroyed many times, including the late 16th century. Since that time, the temple has gone through continuous cycles of disuse and reconstruction. The Main Hall and Daishi Hall are connected by a walkway where 33 Sanju Kannon statues are on display.

Kobo Daishi founded this temple in 821 on the order of Emperor Saga. As with other temples, the temple was destroyed in the late 16th century. What makes this temple different is the long U-shaped building behind the main hall that houses 200 statues of Rakan (enlightened followers of Buddha). Each statue has a different facial expression, and, in keeping with Rakan traditions, are generally humorous. All 200 statues were carved out of wood by two Buddhist monks in the 18th century. There are two wells where you can hear when even one drop of water reaches the water below. One is next to the Main Hall and the other is close to the stairs after entering from the main gate.

The temple was originally founded by Kobo Daishi  about 2 km north of its present location. Legend says he struck his staff into the ground creating a hot spring with curative waters. Since then, people have used the hot spring water to cure illnesses. On the temple grounds, there are 33 types of deity statues and an upside down pine tree said to ward off misfortune planted by a hunter after his father was cured of an illness in the waters here. The temple is located among numerous rice fields. To get to the temple, you have to navigate the many narrow roads between the rice fields.

The thing that caught my attention were the pair of well-preserved Nio statues on either side of the main gate. Nio statues are angry-faced, muscular guardians of the temple, and can be found at the entrance to many Buddhist temples in Japan.

Kobo Daishi founded this temple, and the temple (once again) was destroyed in the late 16th century. The Daimyo of Awa province (today’s Tokushima prefecture) visited the temple for a moon viewing party. The main gate built in 1687 is considered to be the finest and oldest gate of all 88 temples. Legend says a band of robbers once lived on the second story of the gate. In the garden is a pine tree which looks like a dragon.

Temple #10 is the first introduction to a mountain temple, however, it is not far away from the city. The temple is at the top of 333 steps from the parking lot, although the steps can be avoided by continuing up the hill by car. Kobo Daishi founded the temple in honor of a girl he met while performing religious activities for seven days at a hut on the mountain. Legend states she supplied all of his needs for the entire seven days. When Kukai asked for some old cloth, the young woman presented him with a brand new kimono. The woman told Kukai she would like to become a saint and help save people. Shortly thereafter she changed into a Senju Kannon. The large tower was moved here from Sumiyoshi Shrine in Osaka in 1873.

After finishing my visit to Temple #10, I drove back to the hotel which took about 45 minutes.

Observations, Thoughts, Impressions of the Shikoku 88 Temple Pilgrimage (up to this point)

First of all, if I had to do it over again, I would not have visited 10 temples on the first day. While it was not hurried, as much as I enjoy going to temples and shrines in Japan, by the 8th or 9th temple I was starting to think “OMG, another temple.” Next time, I will break up the first 17 temples into 3 days.

I was not prepared for how busy Ryozenji (Temple #1) was. But what was even more surprising was how quiet the rest of the temples were compared to Ryozenji (except for those temples where I ran into the large bus tour groups).

I did keep meeting the same groups at each temple. There were a couple of large vans taking smaller groups, and a number of passenger cars all doing the same thing I was doing. I talked with one of the van drivers, and he said he worked for a travel agency that specializes in providing tours for smaller groups of the pilgrimage. I took one of his cards for possible future reference. I only saw 4 or 5 people walking, and 1 person on bicycle. Although, I was surprised to see that many. Starting the pilgrimage in early June means they would probably finish before the worst heat of the summer, but it would still be hot.

The small groups in the larger vans were taking the pilgrimage very seriously. I was able to watch them at most of the temples, and they followed the same routine at each temple (I will be writing another blog sometime soon documenting the procedures) without exception, and the procedures they followed were the recommended procedures for visiting the temples. Most of the people in the passenger cars were not so diligent and serious.

Overall, I thoroughly enjoyed the experience. It provided some quiet time for reflection, a purely “off-the-beaten-path” Japanese cultural experience and an excellent way to see the beautiful island of Shikoku. I am looking forward to the rest of the pilgrimage.