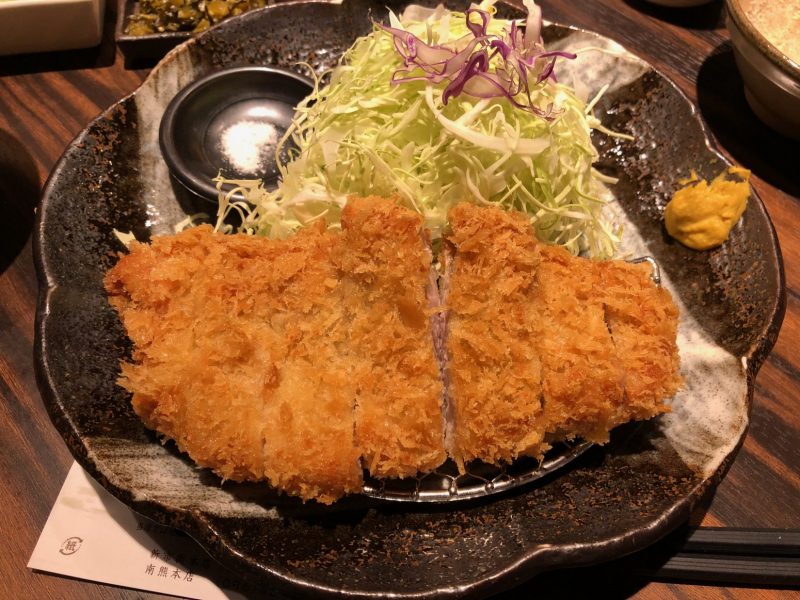 Tonkatsu (豚カツ, とんかつ or トンカツ) consists of a breaded, deep-fried pork cutlet. The pig’s back center is cut into 2-3 centimeter thick slices, coated with panko (bread crumbs), fried in oil, and then served with Japanese Worcestershire sauce, rice, and vegetable salad (usually chopped cabbage). The two main types are fillet and roast or loin.

The word tonkatsu is a combination of the Japanese word ton (豚) meaning “pig” and katsu (カツ), which is a shortened form of katsuretsu (カツレツ), the Japanese version of the English word cutlet.

It originated in Japan in the 19th century. Early katsuretsu was usually beef; the pork version was introduced in 1899 at a restaurant called Rengatei in Tokyo. It was originally considered a type of yoshoku — Japanese versions of western cuisine.

Either a pork fillet (ヒレ, hire) or pork loin (ロース, rōsu) cut may be used; the meat is usually salted, peppered, dredged lightly in flour, dipped into beaten egg and then coated with panko (bread crumbs) before being deep fried.

Tonkatsu is generally served with shredded cabbage, and is most commonly eaten with a type of thick brown sauce called tonkatsu sauce or simply sosu (sauce), karashi (mustard), and perhaps a slice of lemon. Rice, miso soup and tsukemono (Japanese pickles) are normally served with the Tonkatsu and cabbage.

Gyukatsu (beef Katsu) – Popular in the Kansai region. Uses beef instead of pork.

Kurokatsu (Black Pork Katsu) – Popular in Kumamoto and Kagoshima, and uses black pork. Kurobuta (Black Pork) is from a certain type of pig that was originally imported from England.

A similar dish with ingredients other than pork, beef, or chicken is called furai (fry), not katsu (cutlet), such as aji-furai (fried horse mackerel) and ebi-furai (fried prawn)

Where to Find Tonkatsu

Just about every generic Japanese food restaurant (Shokudo)  in Japan offers Tonkatsu. And there are numerous chains that specialize in Tonkatsu such as Tonkatsu KYK.