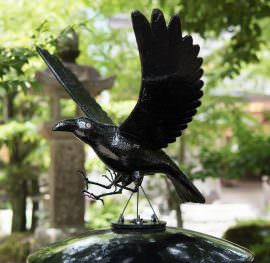 The Yatagarasu (three-legged crow) plays an important part of the mythology of Hongu Taisha. The first is a statue is on a post office box on the Hongu Taisha grounds, and the second is a banner at the main gate of Hongu Taisha. It is said the Yatagarasu is a messenger of the Shinto Sun Goddess Amaterasu. Emperor Jimmu, the first emperor of Japan and a direct descendant of Amaterasu, was born on the southern island of Kyushu about 2,600 years ago. He and his army traveled by boat to the Kii Peninsula. It is the site of today’s Wakayama Prefecture and Hongu Taisha. Legend says that a Yatagarasu led Emperor Jimmu and his army through the rugged mountains of the Kii Mountain Range to the Yamato Plain (where the present-day city of Nara is located). He and his army defeated the local armies there and he proclaimed himself as the first emperor of Japan. The current emperor is the 125th generation of direct descendant from Emperor Jimmu. 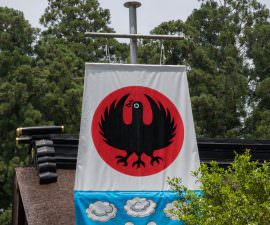